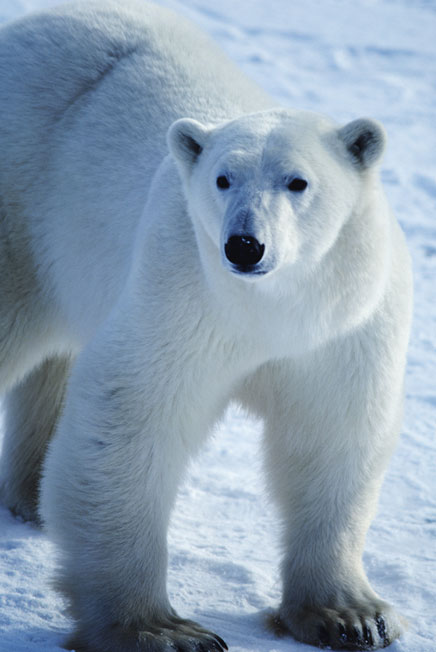 ANCHORAGE, Alaska: More than 500,000 people have commented on a proposal to list polar bears as “threatened” under the U.S. Endangered Species Act.

Monday was the deadline for the public to weigh in on whether America’s polar bears, found exclusively in Alaska, merit additional protection due to global warming.

Bruce Woods, spokesman for the U.S. Fish and Wildlife Service in Alaska, said Monday that e-mail comments alone topped the half-million mark. He said it could be several days before the agency has a tally on the number of comments but that the agency also received enough surface mail and petitions to fill multiple boxes.

Woods could not say with certainty whether any other species has brought in as much public comment.

“To my knowledge, none ever has,” he said. ( more bear photos here)

Maybe people are beginning to wake up. They might have come to realize that with conservatives in charge there is no sitting back and trusting the government to do the right thing. The Bush environmental record.

A half-dozen sitting U.S. attorneys also serve as aides to Attorney General Alberto R. Gonzales or are assigned other Washington postings, performing tasks that take them away from regular duties in their districts for months or even years at a time, according to officials and department records.

Acting Associate Attorney General William W. Mercer, for example, has been effectively absent from his job as U.S. attorney in Montana for nearly two years — prompting the chief federal judge in Billings to demand his removal and call Mercer’s office “a mess.”

A little bit more to the mountain of evidence that the purging of U.S. attorney’s was pure politics.

Iglesias filed a complaint with federal investigators last week, alleging that his dismissal amounted to discrimination based on his status as an officer in the Navy Reserve, which took him away from the job for 40 to 45 days a year. Alleged absenteeism has been the Justice Department’s main public criticism of Iglesias, although officials have more recently added concerns about his handling of voter fraud and immigration cases to their arguments about him.

As usual the argument from the Bush Cult is nothing to see here business as usual, every body does it. Of course BushCo has stretched that excuse to limits beyond logic or ethics even for Washington. AttorneyGate Spotlights GOP Vote Suppression Efforts

One of the worse things to happen to the course of American governance has been the rise of the dime a dozen pundits. That they have tens of millions of viewers and listeners that think these talking heads have anything valuable to add to the national discourse is a head spinner, The Politics of Pundit Prestige

Back in the pre-Internet days of yore, political punditry was the best job in journalism and one of the best anywhere. You could spout off on anything you wanted, and almost nobody would call you on it, much less find a place to publish and prove you wrong. And once you had established yourself as “credible,” it required little work, save coming up with a few semi-memorable phrases. (George Will’s chef-d’oeuvre was opining that the Reagan Administration “loved commerce more than it loathed Communism.”) With the advent of television talk shows, riches arrived in the form of corporate speaking gigs that paid tens of thousands of dollars an hour just to say the same damn thing you said on television. When Fred Barnes famously pronounced on The McLaughlin Group, “I can speak to almost anything with a lot of authority,” he was right, at least to the degree that he was really saying, “I can speak to almost anything without anyone pointing out how full of shit I usually am.”

Shocker, Instapundit lies about job numbers under Bush and Jonah Goldberg approves Unemployment Rate: Clinton v. Bush43 Once again figures don’t lie, but liars do manipulate figures. Its all part of the initiation ceremony at Conservative High when it comes to economics drink the kool-aid and spread the BS, Reagan’s Cowboy Capitalism: Throw Slogans at Problems

§ Lower Taxes Mean More Work, More Investment, More Revenues. The Government Accounting Office concluded that $19 billion of investment tax credits in 1978 affected investment decisions very little. A recent study by the Treasury’s Office of Tax Analysis found that big investment tax credits “buy little or no additional equipment.” Business invests if there is a profit to be made, not because one of its costs is reduced. Working Papers editor Bob Kuttner has written, “Lowering taxes is just as likely to encourage people to substitute leisure for work,” as to encourage more work and saving. According to Walter Heller, President Kennedy’s chairman of the Council of Economic Advisers, “The notion that a tax cut’s prompt demand stimulus–let alone its long-delayed supply stimulus–could generate enough revenue to pay for itself, unfortunately finds no support in the available statistical evidence.”

Wilmer Cook: Keep on riding me and they’re gonna be picking iron out of your liver.
Sam Spade: The cheaper the crook, the gaudier the patter, eh?