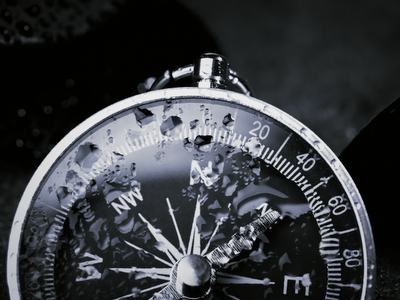 David Michael Green takes yet another stab at listing the hypocrisies and inconsistency of the tea bagger conservatives. How Do You Take Your Tea? With Heaping Spoonfuls of Irony, Of Course

It’s ironic, to begin with, that the ones who are bitching loudest today are precisely the people who created the mess we’re in.

There have been several profiles of the tea nuts thus far and they all state similar statistics. Mostly while, older, many on or near collecting Social Security and Medicare and despite those early claims last year to be bi-partisan, overwhelmingly conservative. These are not simply the same people who voted for Bush twice and voted for Republicans in every election since 2000, they are the dead enders who think Bush and Cheney were not right-wing enough.

Taxes today are a mere hint of what they used to be, just as the right has insisted must be the case. For the rich especially, top marginal income taxes have come down from 91 percent to 35 percent. But, of course, even that doesn’t include earnings on capital gains, a giant portion of their income, which is now at 15 percent. Nor does it include the estate tax, which has now disappeared entirely. Nor does it include deductions and write-offs. Put this all together and you can see why Warren Buffett, one of the richest people in the country, was moved to reveal that he paid a 17.7 percent tax rate on his $46 million of taxable income in 2006, while his employees paid an average of 32.9 percent, and his receptionist’s tax rate was 30 percent.

All election cycles run to a large degree on perceptions and emotions. Individuals who show an incredible immunity to the facts. rather than backing up and accessing fact based evaluations of where the country is, acts seem to have the opposite affect on the far Right. They dig into their distorted reality even further. A more apt name for the tea nut movement would have been the moles movement or the ostrich movement. From Reagan to Gingrich’s 90s conservative revolution to Bush 43 the story of the economy has largely been a story of conservatism in action. Give The Big Dog credit for slowing the trend and putting some of the nation’s wealth into the pockets of the median income class – those who worked the hardest, but conservatism has eroded a good part of New Deal and Great Society reforms which created and maintained the largest middle-class expansion in history.

Unless, of course, they’re prepared to slash Social Security and Medicare spending. Which they’re not. When the New York Times ran a poll on tea partiers back in April, it found that they tend to favor the generic idea of cutting government programs. Just not the only ones that really matter. Some were unable to reconcile the competing concepts: “‘That’s a conundrum, isn’t it?’ asked Jodine White, 62, of Rocklin, Calif. ‘I don’t know what to say. Maybe I don’t want smaller government. I guess I want smaller government and my Social Security.’ She added, ‘I didn’t look at it from the perspective of losing things I need. I think I’ve changed my mind.'”

Welcome back to sanity, Jodine. But that’s a bit of a problem. A Paul Krugman column recently reported why: “Howard Gleckman of the nonpartisan Tax Policy Center has done the math. As he points out, the only way to balance the budget by 2020, while simultaneously (a) making the Bush tax cuts permanent and (b) protecting all the programs Republicans say they won’t cut, is to completely abolish the rest of the federal government..

I read the same conservative twiddle in every news section report on the economy. Obama and Democrats are to blame. After all look at the debt and the spending. Much of the debt is an inheritance from the Bush era and Republican control of Congress where there was no attempt to rise revenue to match their spending. Obama inherit not just the debt, but the interests payments. Revenues also fell because Obama inherited the worse economic down turn in 75 years. Paul Krugman, Brad Delong and the Keynesians are still right. We have to spend some funds to save jobs – the relief part of the stimulus. And we need to spend money to create jobs. If the private sector can still be making record profits and paying outlandish bonuses than whatever Democrats are doing cannot be bankrupting the country or turning it into a socialist paradise. If Obama and Democrats or Santa Claus does absolutely nothing we’re still going to have rising debt via Bush’s original deficit plus the interests. The stimulus funds – the original TARP – is on it’s way to being recovered by the administration and there are still some stimulus funds left to spend.  ( A suggestion for Democrats and independents who comment on news stories; take five minutes to post the numbers rather than trying to wing it from fragments of memory. Republican doomsayers about TARP and the stimulus or Recovery Act are beginning to look as foolish as Franklin Roosevelt bashers.) Republicans are not in the least bit restrained by conscience or the rules of rational debate when it comes to trying to sway the public – Sorry, Newt: Democrats are the Party of Paychecks

But it was the release of a Census Bureau report in September (“Income, Poverty, and Health Insurance Coverage in the United States: 2008”) which in 67 pages laid bare the economic devastation and human toll during the Bush presidency. As The Atlantic (“Closing The Book On The Bush Legacy”) rightly noted, “It’s not a record many Republicans are likely to point to with pride”:

On every major measurement, the Census Bureau report shows that the country lost ground during Bush’s two terms. While Bush was in office, the median household income declined, poverty increased, childhood poverty increased even more, and the number of Americans without health insurance spiked. By contrast, the country’s condition improved on each of those measures during Bill Clinton’s two terms, often substantially. 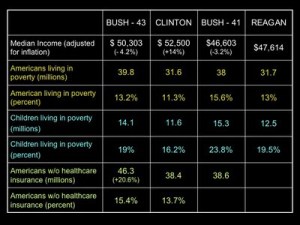 This table (via The Reaction) provides a horrifying snapshot of the scope of the national calamity under George W. Bush…

We know Republicans think most working Americans are “hicks”. They also think those hicks are the ones responsible the the Great Recession – Conservatives Push Absurd Lie that Wall Street Hustlers Were Innocent Victims

The narrative gained steam with an influential op-ed in the Wall Street Journal by Peter Wallison, a fellow with the American Enterprise Institute (who, according to his bio, “had a significant role in the development of the Reagan administration’s proposals for the deregulation of the financial services industry”). Wallison found that “Almost two-thirds of all the bad mortgages in our financial system, many of which are now defaulting at unprecedented rates, were bought by government agencies or required by government regulations.”

The data shows that the principal buyers were insured banks, government sponsored enterprises (GSEs) such as Fannie Mae and Freddie Mac, and the FHA—all government agencies or private companies forced to comply with government mandates about mortgage lending.

The sleight-of-hand here is pretty straightforward. The U.S. government regulates lenders and provides deposit insurance to banks, which means that a large chunk of all home loans—good, bad, and in between—have some connection to a government program. It’s like saying that the government is responsible for pollution because the EPA regulates industrial emissions.

As recently as 2005 conservative economic guru Alan Greenspan said, “A bubble in home prices for the nation as a whole does not appear likely.” He added, “Home price declines . . . were they to occur, likely would not have substantial macroeconomic implications,” and explained that “nationwide banking and widespread securitization of mortgages make it less likely that financial intermediation would be impaired.” Alan is a smart guy. Smart enough to talk himself out of believing his lying eyes just as the right-wing editorial page at the Wall Street Journal is smart enough to talk another generation of rubes to believe unregulated trickle down economics is still the answer even though it has had three major failures in the last thirty years.

H/T to this column from Salon – New York Times runs softball profile of Pamela Geller – In the Times’ telling, the bigoted anti-Islam activist is merely a “provocateur” and Washington outsider. The NYT changed one accusation by Gellar and her bed wetting sycophants – that she lacked evidence when asserting Feisal Abdul Rauf and funding for the Park 51 community center were all tied directly to terrorists. Other than that the article served to generate more hits for Gellar’s blog rants and those of a couple other bloggers suffering from the same strain of delusional paranoia. We could probably all get a NYT profile if we meant the Gela Standard – brains made of silly putty and rusty barbed wire: Gellar and the right freak out over soup made for Muslims. Gellar wakes up with night sweats writes post swearing President Obama is the love child of Malcom X – that is not snark. Gellar has also offered a multitude of other fact free assertions that president Obama has taught seminars in Sharia finance, the Park 51 community center was scheduled to open on 9-11, that Obama was taking cues from Hamas in condemning the attack on the aid flotilla, has claimed Gaza is receiving more aid than “any place on earth” ( in reality that would be Israel), claims to know for a fact that liberal Jews are “lost souls” and once wrote “National Socialists [Democrats] Obamacare: Sheeps to ‘Slaughter Solution.’ ” She added, “The buzz on Capitol Hill is that the Democrats are now considering what is being called the ‘Slaughter Solution’ that will allow ObamaCare to be signed into law WITHOUT HOUSE MEMBERS EVEN HAVING TO VOTE.”. While I try to stay informed and read conservative web and news sites – to be fair and balanced and all – I was not aware there was a contest to see how many streams of sleazy falsehoods conservatives could string together. Ronald Reagan once said that facts were stubborn things. Gellar has carried that line of thought to include utter contempt for facts.