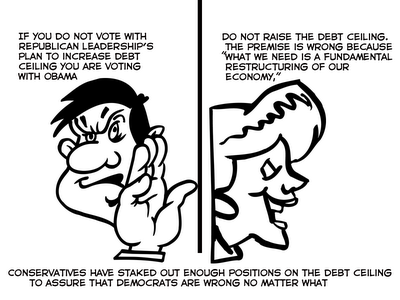 Two of the heavy weights of conservatism come out with opposing positions on Boehner’s deficit reduction plan. It is not news that conservatives have been playing those game for months. It does serve as another good example of the Wall Street Cons versus the village wing-nuts as crunch time is imminent for defaulting on the debt ceiling.  A Time for Choosing by Bill Kristol

This blog post from Kristol is a keeper for the scrap for two reasons. He has endorsed Boehner’s(R-OH) plan which would cut $1.8 trillion from Medicare, Medicaid and Social Security, all to save millionaires a few bucks on their private jets. To listen to conservatives the country’s biggest problem is deficits. So why is Kristal endorsing Boehner’s plan to reduce deficits by maybe $1.1 trillion( probably more like $850 billion) between 2012 and 2021, rather than Obama’s big deficit deal which would reduce the deficit by $4 trillion over ten years. And thanks to Kristol for the most blatant admission to date that conservatives are playing politics with the debt ceiling. Me and every other progressive blogger on the net has said that the major concern of the far Right during deficit reduction talks was not letting Obama and Democrats walk away with anything that looks like a victory. Here is Kristol making the explicit confession that all the posturing is just what it looks like, trying to give Obama the political shaft. On the other hand we have presidential candidate Michele Bachmann(R-MN) once again crossing her fingers and hoping for a meltdown, Michele Bachmann opposes House GOP debt limit plan( this is a Google/AP link and thus will go dead in a few days)

Bachmann, a Minnesota congresswoman, is telling Iowans that she will vote against any measure in Congress to raise the debt ceiling. The three-term House member says blocking the increase will force Congress to cut spending.

[  ]….(here Bachamnn is quoted as saying) ..  According to Bachmann, both parties have flawed approaches to this debate. ”The premise is wrong…because what we need is a fundamental restructuring of our economy,” Bachmann said.

Kudos to Bachmann for masking what will be economic Armageddon in such relatively rosy language. In general terms liberals and progressives would like to see our economy restructured as well. One that is not a plutocracy that disproportionately rewards wealth and treats labor like serfs. The big difference is that those on center to the liberal side do not want the economy to slip into an even worse meltdown. Bachmann and the teahadists think some perfect little economy will grow out of the rubble. If millions of lives are destroyed to achieve those ends, tough.

To reiterate, by pointing out the facts of the math does not mean I think Obama’s budget is the best ( that would be the People’s Budget). It just means that of the plans on the table thus far, his is the best of the worse. Taking this point of view, that facts matter, does not make anyone an Obama apologist.

This is a comment from the Politico link about the $850 billion figure for Boehner’s plan. Their commenters have to register and some such as this one have a picture of the person, so there is a higher probability that it represents a real person and genuine opinion, though no guarantee. It demonstrates  either the deep malicious ignorance of conservative views on taxes or just plain imbecility.

was revenue that is nothing more than the spending Congress does through the tax code.

taxes are your money. How many times have we heard that overworked boiler plate. Taxes are not and should not be about confiscation. In order to run a business or to have a job, a nation must supply infrastructure – bridges, a military, firefighters, fire fighting equipment, public university to provide the trained professional engineers, nurses, teachers, doctors, security experts etc. we must have roads and those roads kept in good repair. Without those things you’re at best operating a stand on the side of a dirt road in some science fiction-like dystopia. Taxes are the price you pay for admission to a stable free market society. Your money, sure its your money but also your responsibility to pay your way. You want to participate in American society without paying taxes means you’re just a free-loader, a leech, a mooch, a parasite because you want the use of all of the infrastructure that makes your income possible without paying for it.

Public Wants a Debt Ceiling Compromise, Expects a Deal Before Deadline – GOP Widely Viewed as ‘More Extreme in Its Positions’. Who has the lowest approval rating for how they are handling the debt ceiling? Congressional Republicans. With Democrats only slightly ahead. President Obama is doing  better than both.

Digby’s post on Josh Marshall thinking the Wall Street wingers will step in and stop the village wingers,

Color me unconvinced. I’ve said before that it would take actual negative effects in the market for enough Republicans to get off their high horse, and enough Congressional Democrats (particularly in the Senate) to cave enough, to push through a default ceiling increase, albeit with very significant cuts to discretionary spending. But I don’t see any outside forces coming in to really sway things before then.

One must remember that while the Tea Party caucus in the House is a useful tool of the financial sector, and promotes economic policies that Wall St. finds highly useful, they don’t actually like Wall St.. These are the sort of people who got elected by promising never to vote for anything like TARP again, who campaigned on Barack Obama’s being a tool of New York bankers and in cahoots with them. Right wing blogs are just as full of conspiracy theories alleging that Obama is in bed with the ratings agencies to needlessly downgrade America’s credit, as some left wing blogs are, though the rationales for the theories are obviously quite different. These people aren’t going to do squat that Wall St. says unless there’s a significant real-world market effect, because they don’t really respect Wall St. or believe anything that a bunch of socially liberal bankers from New York say. And even then the question is iffy.

The weird and often contradictory relationship between the Right and Wall St deserves another post of its own. In the mean time one of the most obvious contradictions has been, as Digby notes, part of the reason the tea smokers were elected because they thought Wall St screwed them over. What has been one of the tea smokers biggest priorities since taking over the House – to fight financial regulation from being funded or implemented. You know the modest regulatory reform that might protect mom and pop tea baggers from getting shafted again by Wall St. It is not difficult to find prominent conservatives sites and politicians ( Ron Paul for example) who swears nothing will happen if the debt ceiling collapses. I’m with Digby, it is likely these nutters will not relent on the debt ceiling until they see the markets go haywire.

Part of conservatism is the enjoyment of self-inflicted hardship, but even bigger is enjoying the suffering of others or the prospects of their suffering – House GOP Plays Ben Affleck Movie Clip To Rally Caucus: ‘I Need Your Help… We’re Going To Hurt Some People’

According to the Washington Post, the House GOP leadership played a short clip from the Ben Affleck movie “The Town” to rally their caucus around Boehner’s debt plan:

Ben Affleck: I need your help. I can’t tell you what it is. You can never ask me about it later. And we’re going to hurt some people.

Jeremy Renner: Whose car are we going to take?

According to the Washington Post, Rep. Allen West (R-FL) replied “I’m ready to drive the car.”

In the movie, the characters then put on hockey masks and bludgeon two men with sticks, then shoot one man in the leg. ( emphasis mine)