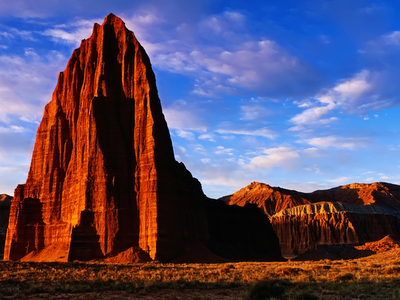 Temple of the Sun wallpaper. The Temple is located in  Capital Reef National Park, Utah.

“It’s not one of those moments where you weigh the consequences or think about the politics,” [Bush] adds. ”You decide. And I made the decisions as best I could in the fog of war. I was determined. Determined to protect the country. And I was determined to find out who did it and go get them.”

In reality, within hours of the 9/11 plane hijackings, Bush’s Defense Secretary Donald Rumsfeld began drawing up plans to launch a war in Iraq “even though there was no evidence linking Saddam Hussein to the attacks.” Indeed, Bush aides quickly went to work undercutting the proposed commission to study the events leading up the 9/11, and despite the growing evidence linking the terrorist act with Osama bin Laden’s al Qaeda group, Bush never made bin Laden a priority. By January 2002, Dick Cheney told the press that bin Laden “isn’t that big a threat.” The next month, Bush said bin Laden was “not the issue.”

Because Bush and the neocons would not get their priorities straight, what had become a relatively easy victory in Afghanistan turned into a quagmire and Bin laden escaped at Tora Bora. Conservatives are still rewriting the Civil War as being a conflict over state’s rights so their ongoing revisionism whereby Bush was Captain America in $2000 cowboy boots is just par for the course. 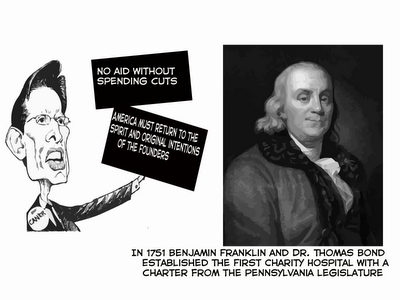 We talked earlier about House Majority Leader Eric Cantor (R-Va.) insisting that federal disaster relief in the wake of this week’s earthquake would no longer be automatic. Whereas Congress used to provide emergency funds after a disaster, without regard for budget caps of offsets, Republicans no longer believe in such an approach.

I said it was likely Cantor would take a similar approach with Hurricane Irene. This afternoon, the Majority Leader’s spokesperson confirmed this with Brian Beutler — if the hurricane does major damage, Republicans will only allow federal assistance if Democrats accept comparable cuts elsewhere in the budget.

In writing about the need for a chairty hospital Benjamin Franklin wrote,

But tho’ every Animal that hath Life is liable to Death, Man, of all other Creatures, has the greatest Number of Diseases to his Share; whether they are the Effects of our Intemperance and Vice, or are given us, that we may have a greater Opportunity of exercising towards each other that Virtue, which most of all recommends us to the Deity, I mean CHARITY.

[   ]…When the good Samaritan left his Patient at the Inn, he gave Money to the Host, and said, TAKE CARE OF HIM, and what thou spendest more, I will repay thee. We are in this World mutual Hosts to each other; the Circumstances and Fortunes of Men and Families are continually changing; in the Course of a few Years we have seen the Rich become Poor, and the Poor Rich; the Children of the Wealthy languishing in Want and Misery, and those of their Servants lifted into Estates, and abounding in the good Things of this Life. Since then, our present State, how prosperous soever, hath no Stability, but what depends on the good Providence of God, how careful should we be not to harden our Hearts against the Distresses of our Fellow Creatures, lest He who owns and governs all, should punish our Inhumanity, deprive us of a Stewardship in which we have so unworthily behaved, laugh at our Calamity, and mock when our Fear cometh. Methinks when Objects of Charity, and Opportunities of relieving them, present themselves, we should hear the Voice of this Samaritan, as if it were the Voice of God sounding in our Ears, TAKE CARE OF THEM, and whatsoever thou spendest, I will repay thee.

But the Good particular Men may do separately, in relieving the Sick, is small, compared with what they may do collectively, or by a joint Endeavour and Interest. Hence the Erecting of Hospitals or Infirmaries by Subscription, for the Reception, Entertainment, and Cure of the Sick Poor, has been found by Experience exceedingly beneficial, as they turn out annually great Numbers of Patients perfectly cured, who might otherwise have been lost to their Families, and to Society. ( all caps are Franklin. all emphasis mine)

There were more obscure Founders, perhaps Cantor and the Tea Morons are guided by one who wrote get yours while you can and screw everyone else. Nate Silver takes a look at what Hurricane Irene might cost –A New York Hurricane Could Be a Multibillion-Dollar Catastrophe

Time to think about the unthinkable. What if a major hurricane were to pass close to New York City, as several forecasting models now suggest that Hurricane Irene might?

Apart from the inevitable loss of life in the most densely populated part of the country, history suggests that the economic damage could run into the tens of billions of dollars, depending on the severity of the storm and how close it comes to the city. Unlikely but theoretically plausible scenarios could have the damage entering the realm of the costliest natural disasters of all time, and perhaps being large enough to have a materially negative effect on the nation’s gross domestic product.

Even a non-worse case scenario might mean billions in damage along the north-east coast.

Robertson Suggests Crack In The Washington Monument Was A Sign From God. The great thing about Robertson’s attacks on America are they are fact free. Limbaugh, Coulter, Cantor, Perry, Bachmann, Palin and Romney all use such “arguments” or rather beliefs they pulled out of some body cavity. So they cannot be argued with using tired old logical arguments based on facts. I admit to a certain envy. Opening one’s mouth and just letting the most base, unhinged, factless, gutless, anti-reason, anti-rational verbal turds fly out is one of the great selling pints of conservatism. facts and humanitarianism are such weighty burdens, it’s no wonder that many people are scared off liberalism and progress. Be a conservative and give in to human nature’s most base instincts.

Two weeks before Thanksgiving in 2003, top officials from Texas Governor Rick Perry’s office pitched an unusual offer to the state’s retired teachers: Let’s get into the death business.

Perry’s budget director, Mike Morrissey, laid out a pitch that was both ambitious and risky, according to notes summarizing the meeting provided to The Huffington Post.

According to the notes, which were authenticated by a meeting participant, the Perry administration wanted to help Wall Street investors gamble on how long retired Texas teachers would live. Perry was promising the state big money in exchange for helping Swiss banking giant UBS set up a business of teacher death speculation.

All they had to do was convince retirees to let UBS buy life insurance policies on them. When the retirees died, those policies would pay out benefits to Wall Street speculators, and the state, supposedly, would get paid for arranging the bets. The families of the deceased former teachers would get nothing.

The meeting notes offer the most direct evidence that the Perry administration was not only intimately involved with the insurance scheme, but a leading driver of the plan.

It has been the case that sometimes corporations take out life insurance policies on active employees – say an accountant, a materials scientists, a top end programmer. In the case of their death the corporation receives all the proceeds to compensate them for the loss of a valuable employee and the cost to recruit and train a new one. A lot of people are disturbed by that, but one can see where is the companies might have a point regarding employees with special skills as business assets. There is a tint of vulture-like behavior about it, but it is not illegal or unethical. Perry and company were full on into the vulture behavior. These are retired teachers. Insurance companies – at least traditionally do not allow parties who do not have a real financial stake in someone’s life to take out a life insurance policy on just random persons or groups of people. As the article notes of course the practice of insuring employees has been abused, – “Corporations had been using mass purchases of life insurance policies on their employees for years as part of an elaborate tax avoidance scheme (the government doesn’t tax insurance premiums or death benefits). The employees themselves — affectionately referred to as “dead peasants” among insurance experts — received no benefit.”

Walmart took a particularly bad PR beating for the practice, in large part because the company was profiting from massive life insurance policies on rank-and-file workers whom it paid low wages.

How a state would team up with private entities who were going to bundle up these policies as securities – like the CDOs that were part of the Wall St meltdown is anyone’s guess. As a partner in such a scheme the state of Texas would have been liable for part of any losses. Former Texas Senator Phil Gramm(R) was at the center of this elaborate death pool/securities bundling plan. Why Gramm and his wife are not in the cell next to Bernie Madof is a testament to how much power he has.

IN GOPer: I Just Talked About Baseball With The Young Man I Solicited On Craigslist

State Rep. Phillip Hinkle, the anti-gay marriage Indiana Republican accused of offering to pay a young man he met over Craigslist for “a good time,” admits that he paid the man but contends that they didn’t do anything illicit — they just talked about “baseball and the view.”

[   ]…Hinkle said that when Gibson got there they just talked about “baseball and the view,” and that when Hinkle came out of the bathroom Gibson had left, and stole the money, the iPad and the Blackberry. “I went to the edge,” Hinkle said, “but I didn’t fall over the edge.”

“I got everything back but the iPad,” Hinkle told the Star, “and quite frankly, if that makes them feel good, so be it.” He noted that he won’t be filing a police report.

When asked why he arranged the encounter to begin with — and why he used his public e-mail address — Hinkle said. “I don’t know. I’m telling you, I don’t know.”

Hinkle told Matthew Tully of the Star: “Somewhere upstairs a button got pushed, and I want to know why. People keep asking: ‘What were you thinking?’ I honestly don’t know. It’s as simple as that.”

“I say that emphatically,” Hinkle also said. “I’m not gay.”

Except for the people who voted for him based on bizarre wing-nut ideas about what constitutes family values, no one cares whether Hinkle is gay. It is when you lie to everyone, lead a secret life, set up these unseemly rendezvouses in hotels where money is exchanged that people wonder about your judgment and who you really are. When constituents talk to Hinkle are they talking to a guy who knows who he is and what he is about, or are they talking to a guy who’s life is a lie.