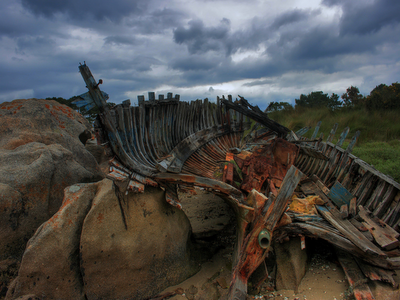 Santorum’s ‘Freedom’ is Pretty Much Slavery

He began by doing what conservative presidential candidates always do in this season of economic privation: talked about his family’s one-time economic privation. It wasn’t off the cuff. “As you know,” he said, “I do not speak from notes, but there’s a couple of things I want to say that are a little more emotional, so I’m going to read them as I wrote them.” And what were the words he so carefully wrote to read at this, his moment of triumph? That his grandfather came to the United States from Italy in 1925: “because Mussolini had been in power now three years, and he had figured out that fascism was something that would crush his spirit and freedom and give his children something less than he wanted for them.” He came because—why else?—he loved freedom.

(Brief digression: he says his grandpa came in 1925. Someone should look into this. The racist Immigration Act of 1924 had the previous year made it very, very difficult for anyone from such a dirty, disgusting, non-Anglo Saxon place like Italy to emigrate to the U.S. Maybe Santorum got the date wrong. In any event, the very fact of the 1924 law is another disturbance marring the official Republican cult of America-Is-And-Always-Has-Been-Perfect that I will be discussing below. End of digression.)

So, from the unfreedom of Mussolini, he marched into the rosy-fingered dawn of American freedom—which Santorum described thusly:

“He left to the coal fields of Southern Pennsylvania. He worked in the mine at a company town, got paid with coupons, he used to call them.”

Let us dwell on that. Grandpa Santorum lived in a company town where he was paid in “scrip” in lieu of cash. That means what his grandson calls “freedom” was, well and truly, something more like slavery.

Populism is tricky. The one thing that Santorum would ave had going for him in public life was the lessons he learned from his grandfather. Except like former British PM Maggie Thatcher – who also came from a a family of modest means, they seemed to have decided they wanted to be excepted as one of the Kool Kids and pander to the wealthy elite. Rick and Maggie are like characters in yet another bad high school dramedy where the dweebs betray their roots to fit in with the elite. There are meteor crater sized holes in Snatorim’s tale, but that hardly matters to the rank and file wingers who eat up that faux populism. What makes Rick’s story bizarre is the contrast between his grandfather’s life of real work and Ricky the conservative welfare poster child. The Sordid K Street Past of Rick Santorum

Since losing his Pennsylvania Senate seat in 2006, Santorum has used his connections to land a series of highly-paid jobs. Consol Energy, a natural gas company specializing in “hydrofracking” and the fifth-largest donor to his 2006 campaign, paid him $142,000 for consulting work.

And Rick earned that $142k because e has mad skills in gas mining?

He also earned $395,000 sitting on the board of United Health Services (UHS), a for-profit hospital chain whose CEO made contributions to his Senate campaigns and which stood to benefit from a big hike in Medicare payments Santorum proposed in 2003. (Incidentally, the Department of Justice sued UHS for Medicare and Medicaid fraud during Santorum’s four-year tenure on its board.) Santorum also earned paychecks from a religious advocacy group, a lobbying firm, and a think tank. For pushing legislation benefitting UHS and several other companies, one ethics group named Santorum to its “most corrupt Senators” list.

In 2006 when CREW(Citizens for Responsibility and Ethics in Washington) named Santorum one of the top three most corrupt politicians in Washington. Rick was beat out by Rep. Randy “Duke” Cunningham (R-CA)(who went to jail) and  Rep. Bob Ney (R-OH) who was released from prison after serving 17 months of a 30 month sentence for corruption-fraud charges. Rick somehow dodged a bullet on that one despite being in the middle of the whole K-Street/Jack Abramoff scandal.

If they teach Cluelessness 101 in journalism schools Politico’s Dylan Byers aced that class, What Newt said about food stamps

A reporter on the trail notes that Gingrich frequently says in his stump speeches that he would urge people to demand paychecks instead of food stamps — a talking point that it is not usually met with great alarm by the media. He also frequently says that he would go to the NAACP convention if it invited him. On Thursday morning, the two points came together when he said he would go to the NAACP convention and explain “why the African-American community should demand paychecks and not be satisfied with food stamps.”

Clueless Dylan goes on to ‘correct” the record because Dave Weigel tweeted “Newt: African Americans Should Get Off Food Stamps; Demand Paychecks”  and The Daily Beast ran the headline, “Gingrich to African-Americans: Get Off of Food Stamps.” Dylan, Dylan, Dylan. I know that Politico is  a shallow fetid cesspool of reporting, but try to imagine this scenario. Its called formulating a counter factual. In this case it clarifies Newt’s racism. Why connect food stamps with African-Americans. It is a statical fact that more poor whites and poor southern whites in particular collect food stamps than black Americans. More white American collect what conservatives call welfare – aid to dependent children, which has a work requirement of forty hours a week to collect – than black Americans. So who didn’t Newt say why the white community should demand paychecks and not be satisfied with food stamps. Or why the Latino Catholic community should demand paychecks and not be satisfied with food stamps.

A Newt spokesperson has said, like a good little conservative parrot with a tiresome talking point, that food stamps are an insensitive for people to be lazy. I have never seen any studies or data to back that up. It is a conservative myth. Supplemental Food Assistance pays just over $4 a day in benefits. There is an incentive. Get a good paying job as soon as possible because eating potatoes and corn flakes everyday gets old real fast. Minorities in America were the hardest hit by the financial collapse caused by conservative economic policies that Newt advocated – they have seen some relief in 2011. This is the same Newt has has been riding the wing-nut welfare gravy train forever. Taking $1.6 million from Freddie Mac for “historical” advice being of the most egregious examples of pay for play politics in America. The dirty money eating away at democracy. More on Newt here, The Dog-Whistle Behind Newt’s Food Stamps Rhetoric

Another Romney layoff victim, this one a conservative, speaks out

Reuters published a blockbuster story today on GS Technologies, a steel mill in Kansas City that was acquired by Bain Capital, leading to the layoffs of some 750 workers. In this case, the workers lost promised severance pay and health insurance; their pension benefits were slashed. and a federal government insurance agency had to bail out the company’s pension plan — even as Bain raked in millions and millions of dollars in profits.

Now a man who says he worked at the plant for 34 years — a self-described conservative — is speaking out about Romney.

While I deeply sympathize with these men and the fact that working for 34 years still means that people like Romney can come along with their sick twisted ideas of how to implement capitalism, there is a larger point missed. Mr. Wells is only mad at Romney because Mittens is the clear embodiment of how he and his coworkers were given the shaft. Romney is the immediate cause, but it is conservative policies, ones he voted for that are ultimately to blame. He is in Missouri, but he is one of those people Thomas Frank wrote about in What’s the Matter with Kansas? How Conservatives Won the Heart of America (2004) . Wells is happy to vote against his own rational self-interests based on what he heard from Limbaugh or saw on the Fox Propaganda Channel. They talked about America, God and patriotism. Wells never stopped to see if these loony zealots were wrapping intrinsically anti-American crap in a nice red, white and blue ribbon. Mr Wells,

“Right now, if Romney gets in, I am so disgusted that I will probably vote for Obama and I detest him,” Wells says. “Anyone who is willing to put a predatory capitalist in office deserves to get Obama.”

If someone asked him why he “detests” President Obama his answer would likely be a garbled version of what we hear from right-wing conservative pundits everyday. Thanks to Bill O’Nutbar for providing an example – O’Reilly Adopts Mitt Romney’s “Entitlement Society” Language To Defend Him From MoveOn Ad

Bill O’Reilly opened his Fox News show tonight by talking about a purported increase in “political viciousness.” During the segment, he played a MoveOn.org ad criticizing Mitt Romney’s record on jobs.

O’Reilly also stated that “the campaign is really all about an entitlement society versus a self-reliant one, and the struggle will be intense.” That “entitlement society” language comes straight from the mouth of one Mitt Romney.

BEDFORD, N.H. — Mitt Romney framed the 2012 presidential election in a speech here Tuesday night as a choice between an “entitlement society” dependent on government welfare and an “opportunity society” that enables businesses to flourish.

After playing MoveOn.org’s anti-Romney ad, O’Reilly opined, “Now, that propaganda will most likely not change many hearts and minds, but it gives you an idea of what’s to come.”

Conservatives crashed the economy, voted for TARP, have blocked every job creation measure advocated by Democrats and the income gap between the elite and working guys like Wells are as big as ever. Bill, who makes an estimated $3 million dollars a year for convincing the Mr. Wells of America to vote against their own rational self-interests, has the gall to describe himself and Mittens as self-reliant.

In the bizarro world of conservatism the “self-reliant” like Bill, Mittens and billionaire hedge fund mangers are working over 200% more, are 200% more worthy citizens, are worth 200% more to American society than Mr. Wells. The steal workers, the registered nurses, the shoe store mangers, the bricklayers, the janitors, the court clerks, the customer service reps should all be damn thankful that the right-wing elite lets some of the wealth these average Americans create trickle back down to them. That is what European kings and dukes used to say to the peasants who did all the work that created the wealth of royalty.

In interesting history “The Greatest Grid: The Master Plan of Manhattan, 1811-2011,”

They are both the same spot. Not so long ago, all things considered, the intersection of Broadway and 84th Street didn’t exist; the area was farmland. “The Greatest Grid: The Master Plan of Manhattan, 1811-2011,” now at the Museum of the City of New York, unearths that 1879 picture of the Brennan Farm among other historic gems. The show celebrates the anniversary of what remains not just a landmark in urban history but in many ways the defining feature of the city.

After all, before it could rise into the sky, Manhattan had to create the streets, avenues and blocks that support the skyscrapers. The grid was big government in action, a commercially minded boon to private development and, almost despite itself, a creative template. With 21st-century problems — environmental, technological, economic and social — now demanding aggressive and socially responsible leadership, the exhibition is a kind of object lesson.

I do not have a photo of the downtown Manhattan from that era, but I do have one of Brooklyn: 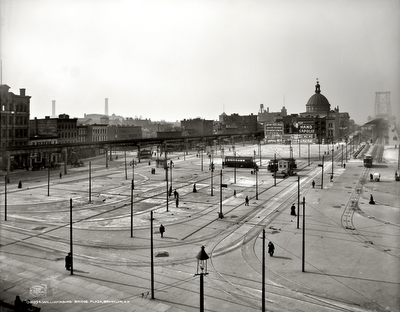