A few bits of history for, well a made up holiday that lumps together the celebration of George Washington and Abe Lincoln. or as it is known in some quarters – early Spring sale day. I differ on some of the particulars, but I agree with Jonathan Bernstein that is a democratic republic such as ours, when the ideals if not actual practice of the new nation, was to be of deeply egalitarian in spirit, paying homage to politicians just ain’t right. As individuals people want to get together and celebrate this or that president or senator, by all means have at it. How about a liberty day or a celebration of the faceless millions who lived and did the best they could to be good citizens.

First up, on this day February 20, 1809, Supreme Court rules that power of federal government is greater than that of any individual state. Appointed by President John Adams Chief Justice John Marshall

Marshall, Ch. J., delivered the opinion of the court as follows:–With great attention, and with serious concern, the court has considered the return made by the judge for the district of Pennsylvania to the mandamus directing him to exercise the sentence pronounced by him in the case of Gideon Olmstead and others v. Rittenhouse’s Executrices, or to show cause for not so doing. The cause shown is an act of the legislature of Pennsylvania, passed subsequent to the rendition of his sentence. This act authorizes and requires the governor to demand, for the use of the state of Pennsylvania, the money which had been decreed to Gideon Olmstead and others; and which was in the hands of the executrices of David Rittenhouse; and in default of payment, to direct the attorney-general to institute a suit for the recovery thereof. This act further authorizes and requires the governor to use any further means he may think necessary for the protection of what it denominates “the just rights of the state,” and also to protect the persons and properties of the said executrices of David Rittenhouse, deceased, against any process whatever, issued out of any federal court, in consequence of their obedience to the requisition of the said act.

If the legislatures of the several states may, at will, annul the judgments of the courts of the United States, and destroy the rights acquired under those judgments, the constitution itself becomes a solemn mockery; and the nation is deprived of the means of enforcing its laws by the instrumentality of its own tribunals. So fatal a result must be deprecated by all; and the people of Pennsylvania, not less than the citizens of every other state, must feel a deep interest in resisting principles so destructive of the Union, and in averting consequences so fatal to themselves.

The rest of the judgement is at the link. Even though it had been years since the first lose Articles of Confederation had been annulled had been replaced by the U.S. Constitution in 1788, there was still a tendency for some states to act on certain matters that deprived the jurisdiction of the federal courts. This one involved a dispute between states. A matter that could not be rightfully decided solely by state level courts.

Since President’s Day started as a tribute in honor of George Washington, Title: His Excellency: George Washington Esq: L.L.D. Late Commander in Chief of the Armies of the U.S. of America and President of the Convention of 1787

In 1787, the confederation of the 13 American states was descending into disarray. The coffers were empty, New York and New Jersey were in a dispute over duties charged on goods crossing state lines, farmers in Massachusetts were rebelling, and Spain and Britain were encroaching on American territories in the west. The Federal Convention was called to address the problems of governing the young republic under the existing Articles of Confederation. The convention responded by framing the document that became the United States Constitution. The convention delegates elected George Washington, the hero of the Revolutionary War, to be the convention’s president. The artist Charles Willson Peale decided to use the convention to sell printed engravings of a new portrait of the general as part of his portrait series of the authors of the Revolution. Peale’s previous attempts to sell prints of the nation’s leaders had proved disappointing and this one fared no better. Although it was not a commercial success, this portrait is considered historically important. Depicting the leader of a nation in crisis, it is one of the few portraits of Washington that bears no trace of a smile. 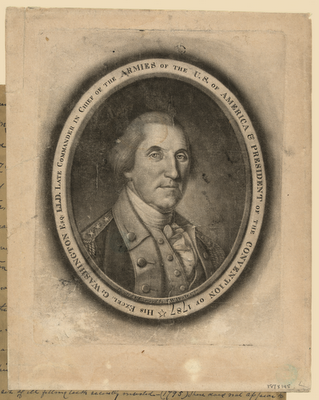 Despite the lack of a smile this is my favorite picture of Washington. Maybe because he seems more expressive and human than the famous painting (The Athenaeum) by Gilbert Stuart. In that painting – legend, myth or whatever – he does look as though he is in pain from his dentures.

Without government help, the Big Three will almost surely enter the kind of bankruptcy from which there is no exit. They could file for a Chapter 11 restructuring, but would most likely end up in a Chapter 7 liquidation. Their plants and other operations would be shut and their assets sold to pay creditors. Given the collapse in the financial system and resulting credit crunch, so-called “debtor in possession” or DIP financing would be all but impossible to get. Bankrupt firms need DIP financing to operate–to pay suppliers, finance inventories and meet payroll–while they restructure. It is risky for DIP creditors even in good times, but they do get first dibs on the bankrupt firms’ assets and can earn high rates and fees. But in a credit crunch such as we are experiencing now, nothing will convince creditors to take the risk. [Moody’s Analytics, 11/21/08]

If the economy as a whole were in reasonably good shape and the credit markets were functioning, Chapter 11 would be the way to go. Under current circumstances, however, a default by GM would probably mean loss of ability to pay suppliers, which would mean liquidation — and that, in turn, would mean wiping out probably well over a million jobs at the worst possible moment. [New York Times, 11/16/08]

[  ]…That’s why many analysts and scholars believe GM would likely end up in Chapter 7 bankruptcy, which would entail total liquidation. The company would close its doors, immediately throwing more than 100,000 people out of work. And, according to experts, the damage would spread quickly. Automobile parts suppliers in the United States rely disproportionately on GM’s business to stay afloat. If GM shut down, many if not all of the suppliers would soon follow. Without parts, Chrysler, Ford, and eventually foreign-owned factories in the United States would have to cease operations. From Toledo to Tuscaloosa, the nation’s assembly lines could go silent, sending a chill through their local economies as the idled workers stopped spending money. [The New Republic, 12/3/08]

Isn’t the loss of a million jobs – probably more – what conservatives and rightie libertarians wanted. In write-ups and broadcast punditry, conservatives harp on and on about how saving the auto industry was all about saving the unions. Maybe one day in the slip of a tongue we’ll hear why conservatives were happy as fat little bed bugs at the idea of Detroit going down the tubes. Because it would have devastated the auto workers union. Conservatives cared more about destroying unions that they did about losing a million plus jobs. The conservative governors of Wisconsin, Kansas, Arizona and Florida all passed budgets that gave some kind f tax breaks to corporations that were making millions, yet used the shroud of austerity to weaken state employee unions and lay off workers. Those layoffs hurt businesses in those states far more than tax cuts aimed at the elite helped. Over and over again conservatives have the choice between doing what is best for the USA or following the conservative agenda. They always put agenda before country and working class families.

Maybe they just have not stumbled across it yet, but this little video of Rick Santorum wishing for the days of back-ally abortions and spreading some urban myth about the elderly fleeing the Netherlands because of massive government euthanasia jumps the shark. Rick must be a graduate of the Sarah Palin just say anything that your addled brain can come up school of politics – Obama “Is Manipulating The Domestic Supply Of Energy,” Leaving Us “Enslaved To Foreign Countries And Their Sources Of Energy”. Palin must have been in her cave hibernating when we had eight years of the Bush administration and six years of a super conservative Congress, and yet no energy policy. Oh, that’s right she was probably out shopping with that Alaska state revenue sharing check.

Pat Buchanan was one the wing-nut welafre circuits biggest welafre queens. He babbled on about Holocaust denial, that  gay folks were out to get everyone, that women should be seen and not heard. Except the lack of a big red clown nose he was an obvious and mindless clown of anti-American talking points. He helped the right of center broadcast media bring in viewers – appealing to fear and anger – the base emotions that conservatives always appeal to. Now at least for one outlet the welfare checks and the pity for poor Pat party is over – Pat Buchanan is Not a First Amendment Martyr

The straw that broke the camel’s back was the publication of Buchanan’s latest book, Suicide of a Superpower, in which he laments all the societal changes that irk angry old white men across our land, like uppity blacks and the invasion of the brown horde from south of the border (you can read some of the more colorful quotes here). This is just the latest in a long history of extreme and, many would argue, hateful rhetoric from Buchanan, which includes a variety of sexist, racist and anti-gay statements, not to mention some rather complimentary stuff about Hitler and flirtations with Holocaust denial (see here for more on that). So it wasn’t like Buchanan, in a momentary brain fart, blurted out something he’d rather take back, and for which he could easily be forgiven. This was about a pattern of appalling spoken and written statements over many years.

Buchanan has enjoyed a lucrative career as a pundit for the last couple of decades because he’s articulate and passionate, and his abominable opinions make for good TV. He does indeed say things other people are afraid to say, not so much because he has courage others lack, but because those things are, well, awful. He has every right to speak his mind in any way he likes, but no one has a First Amendment right to a slot on the MSNBC payroll. Furthermore, he’s not being “blacklisted,” he got fired from one corporation. Blacklisting is a decision by a group of employers meant to ensure that you can’t get work anywhere. When screenwriters got blacklisted from Hollywood studios in the ’50s, it meant that they couldn’t ply their trade anywhere in the industry. Pat Buchanan’s voice isn’t being silenced.

How far we have fallen – from the days of Washington when Jefferson and Hamilton battled it out in the newspapers to today when our political pundits consist of ass pimples like Buchanan, Limbaugh, Palin, Ann Coulter and thousands of their clones. None of our first four presidents could get elected today because none of them would past the right-wing conservative litmus tests on religion, the first amendment, state’s rights and the power of Congress to regulate.

Guard against the impostures of pretended patriotism. – George Washington