A General Chart of the West Indies: With Additions from the Latest Navigators,  June 4, 1796 CE

This map, with beautiful green oceans and a green U.S., was created by English mariner Captain Joseph Smith Speer(Born? – died 1837). As a member of the Royal Navy he did fight against the Patriots of the American Revolution. If nothing else he displayed a remarkable ability to survive, also serving in the French Revolutionary Wars and the Napoleonic Wars. It was during the Napoleonic Wars that Speer was assigned to the West Indies. In 1766 he published The West-India Pilot containing 13 maps, followed by an enlarged edition with 26 maps in 1771.

President Theodore Roosevelt and the Teddy Bear character. I keep forgetting to post this cartoon. Yep, they’ve been making fun of presidents for a long time. This political cartoon by Clifford Kennedy Berryman (1869-1949) was in good humor as compared to some of the more critical cartoons, even of that era. It shows the historical connection between Theodore and what would become the most popular toy bear in history. Much like we tend to call all tissues Kleenex, we tend to call all toy bears, teddy bears. In November 1902, Roosevelt was part of a bear hunt in Mississippi. During that hunt, Roosevelt came upon a bear that had been badly injured by hunting dogs. At first Roosevelt refused to shoot it, but later ordered that the bear be put down to end its suffering. The Washington Post ran a Berryman cartoon that illustrated the event. Berryman’s picture of a cuddly cub soon became associated with toy bears for children. A Jewish immigrant and shop owner named Morris Michtom was inspired by the event to make a special toy bear. Michtom sent one to Teddy and asked if he could use his name for the bear. Roosevelt agreed. Upon getting the president’s permission Michtom starting mass producing the new Teddy bear for worldwide sale.

Over the last 12 years it has been the standard conservative operating procedure to give out bogus economic information, economic statistics that can only be justified using unknown mathematical methods and  economic policies that have had the effect of causing significant damage to the average American family. In every case there were better numbers and better economic prescriptions. The so-called librul media never calls out conservatives on their economic scams. They never called the Bush – Republican budgets of 2001-2009 economic disasters. The media continues that trend with Paul Ryan(R-WI). Ryan, Eric Cantor(R-VA) and Kevin McCarthy (R-CA) have labeled themselves the Young Guns, the future of the conservative movement. The media, always looking for a new angle, has been happy to buy into this re-branding of the same old social-Darwinism, an economy that guts the safety net so that billionaires with historic levels of unearned wealth can not only keep their historically tax rates, but have more tax cuts. Just as the media looked at the policies of the Bush years and took a pass on pointing out that conservatives were putting the economic future of America on a maxed out credit car, they are also taking a pass on calling the Ryan budget a dangerous economic lie – Ryan in Two Numbers or Why Does The Media Take Paul Ryan(R-WI) Seriously

Last year, when Paul Ryan first made a big splash with his budget proposal, many commentators — some of them pretending to be moderates or at any rate only moderate conservatives — lavished praise on its fiscal responsibility. Then people who actually know how to read budget numbers weighed in, revealing it as a piece of mean-spirited junk.

Now, on round two, the nature of the discussion has changed; instead of hearing about how wonderful Ryan is, we’re hearing about what a big meanie Obama is for saying nasty things about Ryan’s plan — a plan that is “imperfect” and maybe cuts a bit, but not really that bad.

Except that it really is that bad.

I could do this in detail, but you can learn everything you need to know by understanding two numbers: $4.6 trillion and 14 million.

Of these, $4.6 trillion is the size of the mystery meat in the budget. Ryan proposes tax cuts that would cost $4.6 trillion over the next decade relative to current policy — that is, relative even to making the Bush tax cuts permanent — but claims that his plan is revenue neutral, because he would make up the revenue loss by closing loopholes. For example, he would … well, actually, he refuses to name a single example of a loophole he wants to close.

So the budget is a fraud. No, it’s not “imperfect”, it’s not a bit shaky on the numbers; it’s completely based on almost $5 trillion dollars of alleged revenue that are pure fabrication.

On the other side, 14 million is the minimum number of people who would lose health insurance due to Medicaid cuts — the Urban Institute, working off the very similar plan Ryan unveiled last year, puts it at between 14 and 27 million people losing Medicaid.

That’s a lot of people — and a lot of suffering. And again, bear in mind that none of this would be done to reduce the deficit — it would be done to make room for those $4.6 trillion in tax cuts, and in particular a tax cut of $240,000 a year to the average member of the one percent..

But Obama is very rude for pointing any of this out. 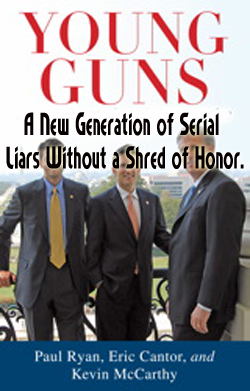 Krugman obviously gets the numbers, but he gets something else most of the media is afraid to say. That any time you call out conservatives on their economic mysticism, their immoral choices about who should be unjustly rewarded and those who should be unjustly punished for daring to be born into a family with modest income, conservatives deflect. Our numbers are bad? Obama is partisan. Obama is mean. That is not to say conservatives will not put on quite a show. If push comes to shove, Fox, the National Review, The Washington Examiner, assorted conservative outlets and the Sunday political shows will parade a virtual parade of bogus numbers. Just as conservatives have decided that their war on women never happened, the Reagan economy and the Bush 43 era have vanished down the rabbit hole. How these people can say they have morals or a set of humane values is the national joke that too few get. Jonathan Bernstein does not so much disagree, but goes into more detail, In Which I Disagree With Paul Krugman

But as much as liberals want to make the case that House Republicans are interested in shutting down the safety net, I don’t think that’s what’s special about Paul Ryan. Shake a stick and you’re going to find a Republican who wants to kill off spending that benefits Democratic constituencies.

No, what I think is notable about Ryan is how fraudulent his budgets are. And that’s why I’d suggest 3.75 as the second key number. That’s the target as a percentage of GDP, under Ryan, for the entire government other than Social Security, Medicare, Medicaid, and CHIP, by 2050. Since Ryan has separately objected to cuts in the military below 4% of GDP, it means that Ryan would theoretically not be able to meet his own target, even if he shut down student loans, FEMA, NASA and the National Weather Service, the FBI and federal prisons, all immigration enforcement, the FDA and other food safety programs, air traffic control, and more. Including programs for veterans. Veterans!

One of the reasons your conservative neighbor buys into these fraudulent numbers is the way conservatives process information. Ryan likely knows that he is selling the fad diet of budgets. That doesn’t matter. His budget is a myth that conservatives can place their beliefs in. They do know that the Ryan or any conservative budget will be aimed at making life more miserable for 10s of millions of Americans. That’s all they need to know. It dove tails perfectly into the conservatives belief that everyone who wants a great paying job could get one, but the unemployed and under-employed are all lazy leeches who would rather live some mythical life of luxury on some mythical government program than find a job. Ultimately we are not having a debate about economics, but trying to convince a cult that they believe in some batsh*t insane garbage that is not even in the neighborhood of genuine patriotism.

A good point here even if it is closing the barn doors too late, Obamacare Isn’t Radical

Why didn’t the Solicitor General provide a couple of easy examples like this – you know, so even Justice Scalia and Justice Roberts could understand it.