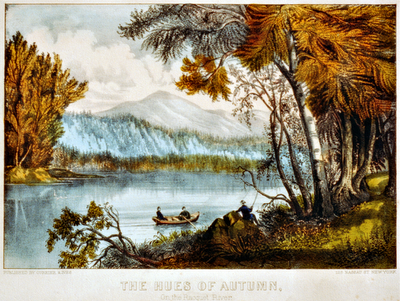 Hues of autumn on the Racquet River by Currier & Ives. Published between 1856 and 1907. Hand colored as all Currier & Ives lithographs were. They had a small army of colorists, mostly women. They would work in an assembly line like manner with each colorists adding blues, greens, browns and so forth until it was finished. Currier & Ives work has grown on me over the years. Overly idealized in some ways, but that is the way our memory works looking back on special times and events in our lives. 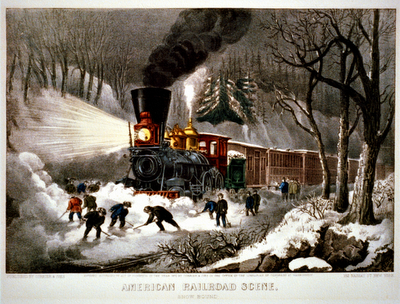 American railroad scene. Snow bound. Lith. By Currier & Ives, 1872. Anyone watching Hell on Wheels. That would be a more accurate description of the eastern leg of U.S. railroad expansion. This lithograph looks almost like a scene from The Polar Express. It might well have been a relief to work in the snow rather the heat of the summer. Earning about $35 a month ( for white laborers) they would have all been part of the class of Americans who Romney views with such disdain. This is a very rough approximation: $35 a month is 1870 would be about $412 today.

John Podhoretz (New York Post) is a major movement conservative intellectual. One should thus read him prepared for some bias. Though even for him, he might have thrown back a little too much of the Republican Rube Juice in defending Romney’s tax returns, Romney the giver

We learned yesterday that last year Mitt Romney paid $1.9 million in taxes on an income of $14 million — and gave $4 million to charity.

We’re all supposed to bow our heads and beg forgiveness at this point for suggesting that Romney is anything, but a stellar tax payer. Romney paid a tax rate of less than 14%. The money rolls in from those ever so scary investments we here millionaires will stop making if they are taxed even 5% higher – to build thing like schools and aircraft carriers.

With open arms: Mitt Romney has given $7 million to charity the last two years, while paying $5 million in taxes.

But the release of these tax records leaves no doubt about one thing: Mitt Romney is an extraordinarily, remarkably, astonishingly generous man. A good man. Maybe even a great man.

Only a conservative with the steel trap intellect of Podhoretz could see Romney as generous. Mitt gives most of his money to the Mormon Church and to a foundation that Mitt himself started. While he is free to do that t hardly makes him a great man. The Mormon Church also gets tax breaks, but it operates much like a corporation: The Vast Majority Of Mitt Romney’s Charitable Donations In The Past Two Years Have Gone To The Mormon Church

In 2010, Mitt Romney took $3 million in charitable deductions on his tax return, against adjusted gross income of $22 million.

In 2009, therefore, 95% of the money Romney’s foundation gave away went to the church.

(Interestingly, the Becket Fund, the second-largest recipient of Romney’s donations in 2009, is also a religious organization. It promotes “religious liberty.”)

Admittedly my bias about what constitutes charity, but the only charity I see on that list is the $1000 to a hospital. More Corporate Greed and Tax Evasion

Those are a few of the conclusions that can be drawn from an analysis of the church’s finances by Reuters and University of Tampa sociologist Ryan Cragun.

Relying heavily on church records in countries that require far more disclosure than the United States, Cragun and Reuters estimate that the Church of Jesus Christ of Latter-day Saints brings in some $7 billion annually in tithes and other donations.

It owns about $35 billion worth of temples and meeting houses around the world, and controls farms, ranches, shopping malls and other commercial ventures worth many billions more.

So Romney is giving huge sums of money to a church which runs commercial ventures and has no obligatin to pay taxes on them. Sounds perfect.

“Most of the revenue of the religion is from the U.S., and a large percentage comes from an elite cadre of wealthy donors, like Mitt Romney,” said Cragun. ” is a religion that appeals to economically successful men by rewarding their financial acuity with respect and positions of prestige within the religion.”

The church is full of successful businessmen, including chemical billionaire Jon Huntsman Sr., the father of the former presidential candidate, J.W. “Bill” Marriott Jr. and his hotel-owning family, and even entertainer Donny Osmond.
[…]
The Mormon church has no hospitals and only a handful of primary schools. Its university system is limited to widely respected Brigham Young, which has campuses in Utah, Idaho and Hawaii, and LDS Business College. Seminaries and institutes for high school students and single adults offer religious studies for hundreds of thousands.

It counts more than 55,000 in its missionary forces, primarily youths focused on converting new members but also seniors who volunteer for its non-profits, such as the Polynesian Cultural Center, which bills itself as Hawaii’s No. 1 tourist attraction, and for-profit businesses owned by the church.

The church has plowed resources into a multi-billion-dollar global network of for-profit enterprises: it is the largest rancher in the United States, a church official told Nebraska’s Lincoln Journal Star in 2004, with other ranches and farms in Mexico, Brazil, Argentina, Australia and Great Britain, according to financial documents reviewed by Reuters.

Ranching and farm industry sources say they are well-run operations.

It also has a small media empire, an investment fund, and is developing a mall across from its Salt Lake City headquarters, which it calls an attempt to help revitalize the city rather than to make money.

I guess if you’re like Podhertz, who like his conservative brethren who thought Dubya and Dick Cheney were a divine gift to America’s foreign policy, you have a very very low threshold for what constitutes greatness. I’m not going to make anymore fun of Podhertz today. The guy is probably in terrible pain from all the blisters on his knees. This is a very good post with lots of links within for those looking for documentation, You Know Mitt Romney is Out of Touch When

You know Mitt Romney is out of touch when he tells his guests in the Hamptons that “I spend a lot of time worrying about those that are poor” after previously declaring, “I’m not concerned about the very poor.”

You know Mitt Romney is out of touch when repeatedly makes false charges about welfare policy while never mentioning his father was “on welfare relief for the first years of his life.”

You know Mitt Romney is out of touch when one of his Hamptons donors explains “the common person” and “the lower income” voter “don’t understand what’s going on.”

You know Mitt Romney is out of touch he expresses his disdain for those common people who wear polyester and plastic rain ponchos, while praising his friends who own NASCAR and NFL teams.

You know Mitt Romney is out of touch when he criticizes President Obama’s call to let the Bush tax cuts expire for only the top two percent of earners as a “massive tax increase” for “on families, job creators, and small businesses,” while proposing an average $264,000 annual windfall for the top 0.1%.

You know Mitt Romney is out of touch when his tax cut proposal supposedly focused on “the people in the middle” could save his own family tens of millions of dollars and his billionaire backers billions more by ending the estate tax.

You know Mitt Romney is out of touch when his surrogate Haley Barbour says Mitt’s tax returns don’t “amount to diddly,” the same expression he used to describe slavery after his state of Mississippi omitted mention of it in its Confederate Heritage Month declaration.

There are at least two constituencies in the conservative movement. Romney and Podhertz belong to the legion watch is really in charge of the Republican agenda. They make sure that the wealthy and powerful stay that way regardless of merit. The other part  is most of Rush Limbaugh and Michelle Malkin’s crowd. They’re the ones you’re likely to encounter on internet forums blaming the recession on Fannie May, spreading the urban conspiracy theories about Democratic politicians being part of some U.N. plot to take everyone’s guns. This latter group is very sure it runs things. On the contrary, Romney, Karl Rove, Bill Kristol, the Koch brothers throw those people a bone in the platform, promise to keep a boot in the face of women, organized labor, people of color and anyone else who gets uppity. If they have to get sleazy and underhanded about it. If they have to break the letter and spirit of the law to do so, they will,  Voting Wrongs

The Republicans’ plan is that if they can’t buy the 2012 election they will steal it.

The plan, long in the making and now well into its execution, is to raise great gobs of money—in newly limitless amounts—so that they and their allies could outspend the president’s forces; and they would also place obstacles in the way of large swaths of citizens who traditionally support the Democrats and want to exercise their right to vote. The plan would disproportionately affect blacks, who were guaranteed the right to vote in 1870 by the Fifteenth Amendment; but then that right was negated by southern state legislatures; and after people marched, were beaten, and died in the civil rights movement, Congress passed the Voting Rights Act of 1965. Now various state legislatures are coming up with new ways to try once again to nullify that right.

[   ]….Eight states have already passed Voter ID laws—requiring a state-approved document with a photograph in order to register or vote, a form of identification that an estimated 11 percent or over 21 million of American citizens do not possess. But these laws are just part of an array of restrictions adopted to keep Democrats from voting. Some use other means to make registration difficult, or put strict limits on the number of days before the election that votes can be cast , or cut back the hours that polling places can stay open.

In the aftermath of the 2004 election, which was characterized in Ohio by lines at voting places in black districts so long as to discourage voters, Ohio Democratic officials made voting times more flexible; after the Republicans took over the state they set out to reverse that.

Iowa, Florida, and Colorado tried to purge the voting rolls of suspected unqualified voters, but their lists turned out to be wildly inaccurate.

While I’m sure conservatives will say so, Elizabeth Drew is no wild eyed lefty. She is a serious journalist who has been covering politics  a long time. James Fellows points out some other articles  written about, what amounts to Jim Crow-Lite laws, Meet the Pontius Pilate of Voting Rights: Pennsylvania’s Supreme Court and Voting: Right or Privilege? By Garrett Epps. The Constitution mentions “the right to vote” five times. Judges, and voter ID law proponents, don’t seem to be getting the hint.

People are much less likely to owe income taxes at the end or the beginning of their careers.  Many non-income taxpayers are age 55 and over and have paid considerable income taxes during their younger, working years.  Others are students under age 25 who will pay income taxes when they complete their education and enter the full-time workforce.

Romney and Ryan are being sold to the American electorate as the two brights guys, the brainy wonks who have all the answers inside their pointed heads. If that is the case why do they have a completely upside down view of who the producers are and who the leaches are. Without American workers there is no economy. The wealthy can start all the businesses they care to, but could luck running them without workers.