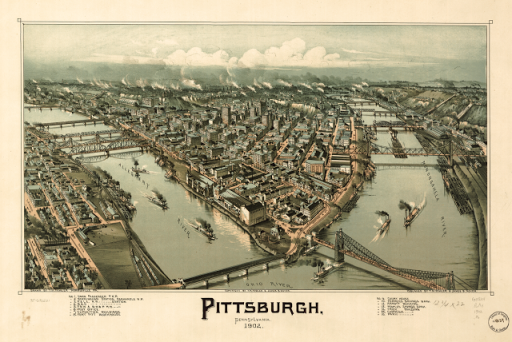 Pittsburgh, Pennsylvania, 1902. Even on the larger image it is difficult to see, but the map legend highlights points of interests such as the post office, Fort Pitt blockhouse, the courthouse, and the Frick, Carnegie, and Park buildings and railroad stations. These old street view maps are usable. If you were in Pittsburgh in 1902 you could find your way around well enough to the major points of the city. Though they really shine as artistic renderings of the city.

President Obama is cutting his holiday vacation short to head back to Washington in hopes of working out a budget deal. Though I wish he wouldn’t it is the smart move to make politically. Unless one lives in the reality challenged world of Fox New’s hack Steve Doocy – who claimed that Obama never really cared about making a compromise deal. This attempt at compromise is just a lot of wasted jet fuel. As Steve Benen explains,

As of Friday, it sounded like Obama had all but given up on those ambitions, and is now eyeing a much smaller agreement.

To be sure, I suspect the president would still prefer a larger deal, such as the one Boehner abandoned a week ago, but last week helped reinforce a couple of important realizations. The first is that Boehner is a weak leader of a radicalized, directionless caucus. The second is that Republicans are so loath to compromise, a meaningful, bipartisan agreement with concessions from both sides is clearly impossible.

And with that in mind, Friday’s comments pointed to what might be called Plan C — lower rates on income up to $250,000, extended jobless aid, a cancellation of the sequester (or more likely, a postponement), and some kind of blueprint for additional action sometime in 2013.

It has always been the aim of that deeply radical and contarian caucus to not agree to anything that President Obama might sign. This is the important aspect of these budget talks for the public to keep in mind as many cross their fingers hoping for an agreement. There was never going to be one if conservatives could help it. If President Obama hand even started near what conservatives wanted they would have demanded even bigger tax and spending cuts. They were always Lucy with the football and Democrats were always Charlie Brown.

There is a video of American history expert Sarah Palin gloating at this link. Conservatives are however inadvertently, at least entertaining sometimes, Fox’s Self-Congratulation Over Benghazi Report Undermined By Report Itself

Fox News figures have tried to use an investigative panel’s recent report on the Benghazi attack to congratulate their network on its coverage of the attack. But the report actually debunks several incorrect and misleading narratives Fox pushed about Benghazi.

[  ]…But the report determined there was “no evidence of any undue delays in decision making or denial of support from Washington or from the military combatant commanders,” and continued, “Quite the contrary: the safe evacuation of all U.S. government personnel from Benghazi twelve hours after the initial attack … was the result of exceptional U.S. government coordination and military response and helped save the lives of two severely wounded Americans.”

Fox also hyped its “exclusive” report that requests for military back-up during the attack were twice denied “by the CIA chain of command” — even though the CIA called Fox’s claims “inaccurate” at the time. But as The Huffington Post pointed out, the Benghazi report debunks that claim. Quoting from the report, Huffington Post wrote, “[A] ‘team leader’ at the annex had ‘decided on his own’ to delay leaving the facility briefly to see if local security elements would arrive with reinforcements. After ‘a brief delay,’ and determining that they would not, the team leader made the decision to move some units toward the compound, the report said.”

Should one decide to venture into the freaky world of conservative spin on Fox news or conservative web sites you’ll find that they were correct about Benghazi and about Fast and Furious ( even though they failed to acknowledge that much of that scandal came down to one agent – A Fortune investigation reveals that the ATF never intentionally allowed guns to fall into the hands of Mexican drug cartels.) This two supposed scandals are good reasons on theory own to never sign up for that nebulous land of the sensible centrist preached from the Beltway and NYT neanderthals like Thomas Friedman. You cannot reach compromises with the morbidly unhinged.

Well, that problem is solved, After Newtown, Sales Boom for Kids’ Body Armor

Six months ago, Amendment II introduced a new line of backpacks, built with the company’s signature carbon nanotube armor, designed to keep kids safe in the event of school shootings. Since Friday’s massacre at a Newtown, Connecticut, elementary school, sales have gone through the roof. “I can’t go into exact sales numbers, but basically we tripled our sales volume of backpacks that we typically do in a month—in one week,” Williams says.

One can hardly blame parents for trying to do something. While, who knows they just might save a few lives, one of the guns the Newtown murderer had was a Sig Sauer semi-automatic. Watch this video of rapid fire practice with a Sig. That is putting a lot of faith in backpack to think it will protect someone with a similar gun. And remember Wayne LaPierre and the NRA blaming everything, including video games Newtown, How The Gun Industry Profits From Violent Video Games

In a controversial diatribe on Friday, Wayne LaPierre, CEO of the National Rifle Association, blamed lax security, natural disasters, and, most of all, violent video games for the massacre at Sandy Hook Elementary School in Newtown, CT that claimed 27 lives. Despite the NRA’s public condemnation of violent entertainment, the New York Times explains, the gun industry is closely entwined with the gaming industry.

In one recent example of this relationship, the gaming company behind the Medal of Honor series launched a promotional website with links to the catalogs of two major gun manufacturers:

Links on the Medal of Honor site allowed visitors to click through on the Web sites of the game’s partners and peruse their catalogs.

“It was almost like a virtual showroom for guns,” said Ryan Smith, who contributes to the Gameological Society, an online gaming magazine. After Mr. Smith and other gaming enthusiasts criticized the site, Electronic Arts disabled the links, saying it had been unaware of them.

Gun manufacturers also grant video game companies licenses to depict real makes and models of weapons. Though these games are now taking heat from the gun lobby for encouraging violent behavior, they continue to serve as a valuable marketing tool for the industry.

I would still make the distinction that these games encourage people to buy guns – look how much fun it is to blow things away – but they don’t necessarily push people to the point of committing mass murder. According to this site, Medal of Honor has sold 1.2 million copies in North America ( Canada, USA, Mexico). Some studies have shown a link between violent video games and aggressive behavior in teens if played over a long period, but others have shown that the link is not that simple – they can in some circumstances increase cooperation ( which is probably why the military uses them). And there is that Harvard study that shows that the more guns that are around the greater the chances someone will use one to commit a crime.

And finnaly for today, when conservatives bully and eat their own, FreedomWorks tea party group nearly falls apart in fight between old and new guard

Richard K. Armey, the group’s chairman and a former House majority leader, walked into the group’s Capitol Hill offices with his wife, Susan, and an aide holstering a handgun at his waist. The aim was to seize control of the group and expel Armey’s enemies: The gun-wielding assistant escorted FreedomWorks’ top two employees off the premises, while Armey suspended several others who broke down in sobs at the news.

The coup lasted all of six days. By Sept. 10, Armey was gone — with a promise of $8 million — and the five ousted employees were back. The force behind their return was Richard J. Stephenson, a reclusive Illinois millionaire who has exerted increasing control over one of Washington’s most influential conservative grass-roots organizations.

Kind of obvious but Krugman still beat me to it, Protecting Freedom(Works)

The problem, clearly, is that despite its Tea Party status, FreedomWorks had failed to implement the security measures libertarians have been recommending for schools. If only the staff had been carrying concealed weapons, and those not armed had been trained to launch human wave attacks on gunmen, none of this would have happened, right?

Isn’t that what real Amerikcans do, shoot it out. Last man standing is the winner.