When you blog about government and public policy it is difficult to avoid making predictions. In the press, something like half the time, by my casual count, they make them to fill up space. To have something to fill the void for wonks and political junkies. When I wrote Thursday about conservatives using the debt ceiling  as an excuse to go after entitlements, that was more about the reliable, but sordid and dangerous agenda of the conservative movement than a prediction. John Cornyn(R-TX): Partial Government Shutdown May Be Needed to Restore Fiscal Sanity

Even for someone unmoved by hyper-ideological, right-wing rhetoric, Senator John Cornyn’s most recent op-ed for the Houston Chronicle is astounding in its mendacity and utter disregard for responsible governance. To wit, after engaging in a little bizarro history—where he blames the president for brinksmanship on the debt ceiling and the fiscal cliff, as if Obama has an obligation to implement the GOP agenda—the two-term Texas lawmaker presents a government shutdown as a responsible way to force spending cuts:

Over the next few months, we will reach deadlines related to the debt ceiling, the sequester and the continuing appropriations resolution that has funded federal operations since October. If history is any guide, President Obama won’t see fit to engage congressional Republicans until the 11th hour. In fact, he has already signaled an unwillingness to negotiate over the debt ceiling. This is unacceptable. […]

The coming deadlines will be the next flashpoints in our ongoing fight to bring fiscal sanity to Washington. It may be necessary to partially shut down the government in order to secure the long-term fiscal well being of our country, rather than plod along the path of Greece, Italy and Spain. President Obama needs to take note of this reality and put forward a plan to avoid it immediately.

Ignoring, for now, Cornyn’s assertion that the United States will end up like Greece—which, as I noted a few days ago, is ridiculous given our ability to print money—it’s worth elaborating on what Cornyn means when he says “shutdown.”

As many probably remember the last time Republicans played games with the debt ceiling the markets started to panic. What will happen if they decide to go clown crazy over the debt ceiling will include an immediate stop to Social Security checks, payments to government contractors, paychecks to government employees – probably including the military, no Medicaid payments to health care providers, among other catastrophes. Contrary to conservative framing these safety net and employee funds do not disappear down a well. Retirees spend their checks on groceries, rent, shoes, new tires. The same is true for government workers and contractors. We’re talking about billions of dollars that will suddenly disappear from the economy. Coryn says that beating the hostage, you know just a little bit, will be necessary to get cuts to balance the budget. Social Security cuts will not balance the budget. Medicare costs will increase in the coming years, but cutting health care will drive up cost for seniors and the disabled. They’ll take money they would have spent on bread or birthday presents for the grand kids and spend it on health care. Politics doesn’t require as much predictive skills as tolerance for reruns. Cornyn would rise the Medicare eligibility age. We just went though that idea with the fiscal cliff. The cost of raising Medicare’s eligibility age 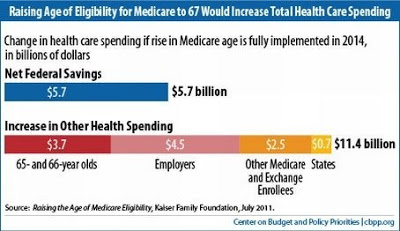 Cornyn and his fellow kool-aid drinkers would throw millions of Americans off the cliff for a tiny slice of the total budget pie. There is no real debt crisis. Since there is no debt crisis there is no reason to throw the economy into a tailspin, take hostages, give America’s most economically vulnerable the shaft or to even get cranky. Any and all outrage about the national debt when we and the rest of the world is in a recession is a running con-game. Washington’s Deficit Obsession Is Insane

The unemployment rate is too damn high, and all that America’s politicians can talk about is the budget deficit. If only they knew that we can take care of both of them at once.

In fact, unemployment and deficits are very much related, or at least correlated, as you can see from this chart, which shows the budget deficit as a percentage of GDP (represented by the green line) vs. the unemployment rate (blue line), going back for the past 65 years. (h/t Joe Weisenthal at Business Insider)
unemployment-graph

Why could this be? For one thing, the budget deficit is largely a function of the government’s inability to collect enough tax revenue from unemployed people. If we can just get those people back to work, then the government will get more revenue, and the deficit will shrink.

Meantime, a lot of the evil government spending that makes the ghost of Calvin Coolidge cry is designed to help carry people through prolonged unemployment and also maybe find new jobs. You know, the social contract. As people find more jobs, some of that spending goes away, as if by magic.

In fact, you can see that has already started to happen — despite Washington’s state of near-panic over the deficit, it has actually been falling steadily since the recession. What else has been falling? You guessed it, the unemployment rate.

What else would make the deficit go down? People like Wal-Mart, Target, Applebees, McDonalds and major retailers paying their employees a living wage. If more people are employed and those employees make more money two things happen: 1) They spend more money on housing, cars, clothes, travel, food etc. and generate more revenue from sales taxes which helps state economies and budgets. 2) Quite a few of these people would get bumped up in tax brackets – they pay a little more into entitlements like Medicare and in general Federal revenue. I don’t know whether Cronyn or other conservatives are lying or utterly clueless about economics when they play the austerity card. Those countries he mentioned –  Greece, Italy and Spain have something in common with Cronyn, the tea bagger mentality, conservative pundits and the media establishment – they want to pursue the failed economic polices of austerity while we’re still in a recession.

Few conservative in the austerity oil burning junker with the bald tires, will publicly admit ( check the comment sections of places like Breitbart, Free Republic, The Gateway Pundit)  that they really want to trash the USA so they can get the country back  to some bizarrely idealized time in the 18th century. Yet that is would be the de facto result of enacting the Republican agenda. Concentrate on getting people back to work and giving them fair compensation for their labor, rather than bringing down deficits and that chart would look much better for the U.S. in 2015. When people like Cronyn say Democrats and Obama are destroying America, that is pure projection of their own agenda.

So there I guess, liberals are wrong. The Tea Baggers are not 100% plastic roots, they’re only 94% plastic.

One would think that since Beck thinks he is America’s biggest patriot he would promote the malevolent agenda of the Plastic Baggers for free.

Today in 1959: Rock pioneer Buddy Holly’s last record released. Holly popularized the Fender Stratocaster. It looks like he is playing a Stratocastor in this video,