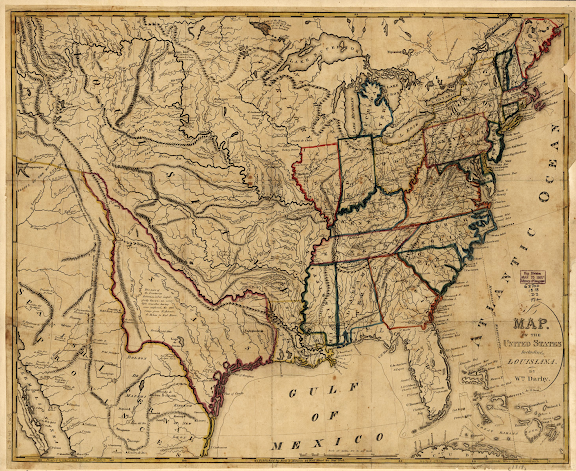 Map of the United States including Louisiana 1818. The Louisiana Purchase was completed in 1803, but much of that territory had not yet become states.

The U.S. has a revenue problem. From 2000 to 2008 conservatives spent a lot of money on the national credit card. It has been the historic custom for the U.S. to pay for it’s wars as they occurred. Republicans decided not to. With this debt and the concurrent interests accruing, the economy went in the dumpster. That was caused by people who had assured us for years they knew what they were doing and did not need to be regulated. Going into 2009 with a new president, he and a Democratic Congress did stop the economy from hemorrhaging jobs and GDP. We bailed out the smart serious know-it-alls on Wall Street. They and corporate America recovered quickly. Frequently returning to the same profit margins they had before the recession. Suddenly the national deficit became this big ugly monster that must be killed before it eats the country. The U.S. even had the luxury of watching Europe experiment with austerity measures and see them fail. Most of the debt we have now is the result of the Bush tax cuts and the recession. That is just a fact. Like your average cult member, conservatives are not having anything to do with these facts. Cultists are like that. By definition a cultists is someone who is not going to let facts get in the way of the dogma they chant over and over again. The Cult of Conservatism does put a little spin on it’s chant in that it is partly composed of unadulterated idiocy and part malevolence. For example, here we have Bill Wilson, president of the far Right cult called Americans for Limited Government. The Non-Existent Spending Cuts Wrought By The ‘Devastating’ Sequester

According to Obama, the sequester would represent “a huge blow to middle-class families and our economy as a whole.” Obama’s White House has also referred to the sequester as “devastating,” saying its cuts would “imperil our economy, our national security (and) vital programs that middle class families depend on.”

In other words this isn’t even really a cut – “devastating” or otherwise – it’s a modest growth rate reduction following years of unnecessary, embarrassing and unsustainable excesses.

Spending first. In 1981, when Reagan took office, the federal government spent 22.2 percent of GDP. That figure dropped steadily for the next two decades, and by the year 2000 spending was down to 18.2 percent of GDP. Expenditures went up after that, but the Office of Management and Budget estimates that by 2017, spending will once again be 22.2 percent of GDP, exactly the same as it was 30 years ago. In other words, spending hasn’t gone up at all.

If you do nothing but watch the evening news or cable news you would never guess that Democrats have cut spending. Or that Democrats have historically been better mangers of the economy than “small” government conservatives. Taxes are lower now than they were under Saint Ronnie. Tax revenue was 19.6 percent of GDP when Reagan took office, and it’s projected to be 19.2 percent of GDP in 2017. maybe raising the overall tax rates .4% would not pay off the deficit, but it might help. The problem with that is the cultists have formed a circle of hysteria around multimillionaires and corporations ( many of whom use loopholes to avoid taxes completely). On the other hand conservative dogma does allow for raising taxes on the working poor and cutting benefits for seniors. There is a never ending echo that says we just can’t afford these benefits. Well, what can we as a nation afford – for seniors to go wotihout food and medicien. For children to be malnurtioned. We definite cannot afford to make Pete Peterson and his pals pay one more penny in taxes or make super profitable corporations pay a living wage. Peterson is the money behind a group called the Fix the Debt Campaign. You know how these wise and wonderful folks knew so much about economics and yet caused the economy to have it’s biggest collapse in 80 years. Well OK, they screwed that up, but they have the answer to our debt problem. Cause massive job losses, funnel billions to fellow cult members in the defense industry, and cut Medicare and Social Security. What is really cool for cultists is when they can get someone famous at an influential newspaper to write about how things could be worked out in a “bipartisan” way if only Democrats would give Pete, Bill Wilson and Republicans everything they want, Woodward Misses The Mark

For the past 18 hours Republicans have been giddily waving around a new article by Bob Woodward as a smoking gun that proves sequestration should be replaced with spending cuts and spending cuts only — and that President Obama once conceded the point.

Here’s the key section, which certainly carries that implication.

[T]he final deal reached between Vice President Biden and Senate Minority Leader Mitch McConnell (R-Ky.) in 2011 included an agreement that there would be no tax increases in the sequester in exchange for what the president was insisting on: an agreement that the nation’s debt ceiling would be increased for 18 months, so Obama would not have to go through another such negotiation in 2012, when he was running for reelection.

So when the president asks that a substitute for the sequester include not just spending cuts but also new revenue, he is moving the goal posts. His call for a balanced approach is reasonable, and he makes a strong case that those in the top income brackets could and should pay more. But that was not the deal he made.

Woodward’s book about the debt limit crisis includes the fairly inconsequential detail that the idea of using sequestration (as opposed to other policy options) as an enforcement mechanism originated in the White House. Republicans, who voted for the Budget Control Act in overwhelming numbers, argue flimsily that this detail absolves them of all blame for the coming spending cuts, and have since tried to turn Woodward into a sort of grand arbiter of the debt limit fight.

But in this case Woodward is just dead wrong. Obama and Democrats have always insisted that a balanced mix of spending cuts and higher taxes replace sequestration.

So Democrats should be reasonable and let the the people whose economic theories have caused so much damage to the country, to have everything they ask for. You know, in the spirit of compromise.