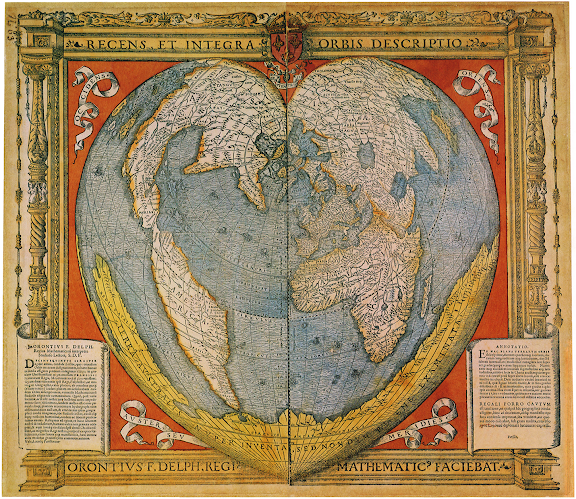 Heart Shaped World Map 1536. As far as map fame goes, this one is somewhat famous. The heart shape lends the image to a variety of causes, beliefs and general artistic appreciation. It was created by cartographer and mathematician Oronce Fine ( Orontius Finnaeus or Finaeus; Italian: Oronzio Fineo)(1494-1555).

Other than Peggy Noonan, who has suddenly decided to be a weird version of Paul Krugman and other economists who think that job creation should take priority over balancing the budget, most conservatives are pro European-style austerity. That austerity even has the same self defeating math, The Ryan Budget’s Tax Cuts: Nearly $6 Trillion in Cost and No Plausible Way to Pay for It. New Tax Policy Center Estimates Show $5.7 Trillion Revenue Loss

The new budget from House Budget Committee Chairman Paul Ryan proposes a series of dramatic tax cuts that would cost nearly $6 trillion in lost federal revenue over the next decade (see Figure 1), and that would provide the lion’s share of their benefits to high-income households and corporations.  But, despite its stated promise to the contrary, the budget does not include a plausible way to pay for it all.

But the very serious zombies of conservatism have put on their blinders. Ryan’s budget has two super important things going for it. It cuts taxes for the wealthy. It is not an Obama-Democratic budget. Thank you, good night and drive home safely. Those are the only things America needs to know. For dessert conservatives get to chip away at the Marxist safety net, known to rational Americans as Medicare, Social Security and Medicaid. 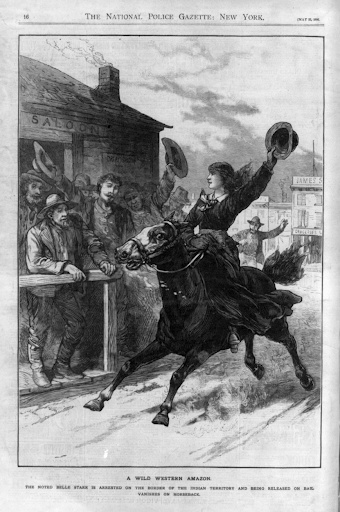 STARR, BELLE. “A wild western amazon. The noted Belle Starr is arrested on the border of Indian Territory and being released on bail vanishes on horseback.” Wood engraving in The National Police Gazette (1886 May 22), p. 16. The NPG published a lot of tabloid style journalism. Belle or Myra Maybelle Shirley Reed Starr (February 5, 1848 – February 3, 1889) was not much of a heroine, though she was far from the most evil person around at the time. In a recent post I mentioned Judge Roy Bean who went from rowdy drunk and part-time criminal, to highly eccentric man of the law. Belle was somewhat a creature of her time. Fine upstanding men in business and politics stole far more than she and her gang ever did. I kind of like the legend and the illustration. Though from what i understand a horse would never run with all four legs flung out in that position. Eadweard Muybridge did show that horses sometimes have all four legs off the ground, but if the front legs were extended the back legs would have been under the horse and vice versa.