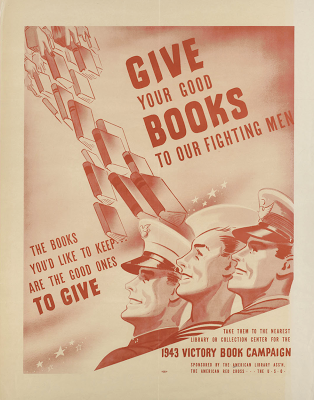 Give Your Good Books To Our Fighting Men. 1943. Kind of a trade-off in messaging, sexist, yet encourages reading and sharing. Courtesy UC Berkeley, Bancroft Library.

Map of St Petersburg, 1724. By Johann Baptista Hohmann (20 March 1664 – 1 July 1724) was a German geographer and cartographer, who is more famous for his maps of the Americas. n 1716 Homann published his masterpiece Grosser Atlas ueber die ganze Welt (Grand Atlas of all the World).  This would have been St. Petersburg during the time of the czars (Tsars), quite a few years before the Russian Revolution (s) that began in 1905.

How Big Corporations Are Unpatriotic
by Ralph Nader

Many giant profitable U.S. corporations are increasingly abandoning America while draining it at the same time.

General Electric, for example, has paid no federal income taxes for a decade while becoming a net job exporter and fighting its hard-pressed workers who want collective bargaining through unions like the United Electrical Workers Union (UE). GE’s boss, Jeffrey Immelt, makes about $12,400 an hour on an 8-hour day, plus benefits and perks, presiding over this global corporate empire.

Telling by their behavior, these big companies think patriotism toward the country where they were created and prospered is for chumps. Their antennae point to places where taxes are very low, labor is wage slavery, independent unions are non-existent, governments have their hands out, and equal justice under the rule of law does not exist. China, for example, has fit that description for over 25 years.

Other than profiteering from selling Washington very expensive weapons of mass destruction, many multinational firms have little sense of true national security.

Did you know that about 80 percent of the ingredients in medicines Americans take now come from China and India where visits by FDA inspectors are infrequent and inadequate?

The lucrative U.S. drug industry – coddled with tax credits, free transfer of almost-ready-to-market drugs developed with U.S. taxpayer dollars via the National Institutes of Health – charges Americans the highest prices for drugs in the world and still wants more profits. Drug companies no longer produce many necessary medicines like penicillin in the U.S., preferring to pay slave wages abroad to import drugs back into the U.S.

Giant U.S. companies are strip-mining America in numerous ways, starting with the corporate tax base. By shifting more of their profits abroad to “tax-haven” countries (like the Cayman Islands) through transfer pricing and other gimmicks, and by lobbying many other tax escapes through Congress, they can report record profits in the U.S. with diminishing tax payments. Yet they are benefitting from the public services, special privileges, and protection by our armed forces because they are U.S. corporations.

On March 27, 2013, the Washington Post reported that compared to forty years ago, big companies that “routinely cited U.S. federal tax expenses that were 25 to 50 percent of their worldwide profits,” are now reporting less than half that share. For instance, Proctor and Gamble was paying 40 percent of its total profits in taxes in 1969; today it pays 15 percent in federal taxes. Other corporations pay less or no federal income taxes.

Welcome to globalization. It induces dependency on instabilities in tiny Greece and Cyprus that shock stock investments by large domestic pension and mutual funds here in the U.S. Plus huge annual U.S. trade deficits, which signals the exporting of millions of jobs.

The corporate law firms for these big corporations were the architects of global trade agreements that make it easy and profitable to ship jobs and industries to fascist and communist regimes abroad while hollowing out U.S. communities and throwing their loyal American workers overboard. It’s not enough that large corporations are paying millions of American workers less than workers were paid in 1968, adjusted for inflation.

Corporate bosses can’t say they’re just keeping up with the competition; they muscled through the trade system that pulls down on our country’s relatively higher labor, consumer and environmental standards.

Corporate executives, when confronted with charges that show little respect for the country, its workers and its taxpayers who made possible their profits and subsidized their mismanagement, claim they must maximize their profits for their shareholders and their worker pension obligations.

Their shareholders? Is that why they’re stashing $1.7 trillion overseas in tax havens instead of paying dividends to their rightful shareholder-owners, which would stimulate our economy? Shareholders? Are those the people who have been stripped of their rights as owners and prohibited from even keeping a lid on staggeringly sky-high executive salaries ranging from $5,000 to $20,000 an hour or more, plus perks?

Why these corporate bosses can’t even abide one democratically-run shareholders’ meeting a year without gaveling down their owners and cutting time short. To get away from as many of their shareholder-owners as possible, AT&T is holding its annual meeting on April 26 in remote Cheyenne, Wyoming!

Pension obligations for their workers? The award-winning reporter for the Wall Street Journal Ellen E. Shultz demonstrates otherwise. In her gripping book Retirement Heist: How Companies Plunder and Profit from the Nest Eggs of American Workers, she shows how by “exploiting loopholes, ambiguous regulations and new accounting rules,” companies deceptively tricked employees and turned their pension plans into piggy banks, tax shelters and profit centers.

Recently, I wrote to the CEOs of the 20 largest U.S. corporations, asking if they would stand up at their annual shareholders’ meetings and on behalf of their U.S. chartered corporation (not on behalf of their boards of directors), and pledge allegiance to the flag ending with those glorious words “with liberty and justice for all.” Nineteen of the CEOs have not yet replied. One, Chevron, declined the pledge request but said their patriotism was demonstrated creating jobs and sparking economic activity in the U.S.

But when corporate lobbyists try to destroy our right of trial by jury for wrongful injuries – misnamed tort reform – when they destroy our freedom of contract – through all that brazenly one-sided fine print – when they corrupt our constitutional elections with money and unaccountable power, when they commercialize our education and patent our genes, and outsource jobs to other countries, the question of arrogantly rejected patriotism better be front-and-center for discussion by the American people.

On occasion Nader has gone off the deep end in the past, but when it comes to talking about how corporate America is damaging the middle-class and democracy he still has some of that late 70s, early 1980s genuine egalitarianism going.