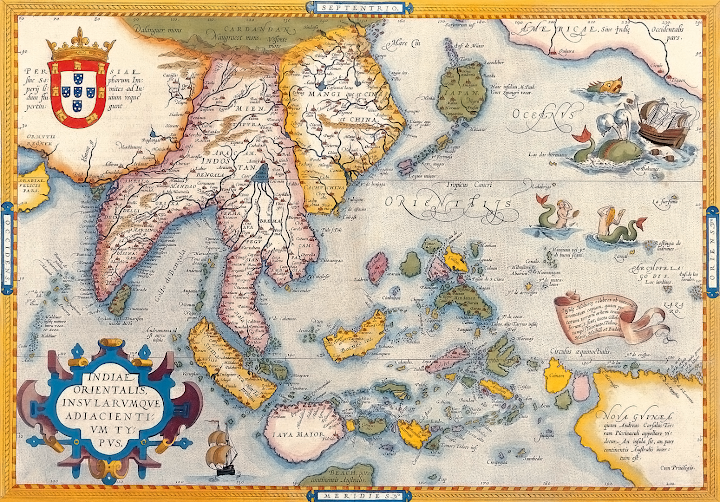 Antique map of Asia c1590 by Abraham Ortelius (1527-1598).  1590 was the year of the Battle of Ivry where French King Henri IV and the Huguenots beat the Catholic League. 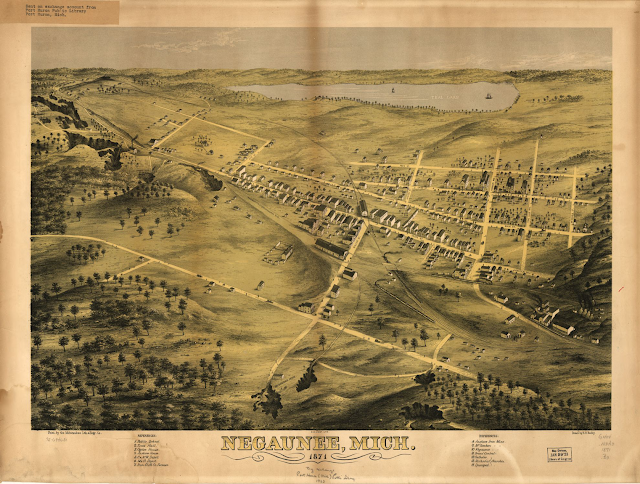 Negaunee, Michigan 1871. One of those maps that is not to scale, but the perspective and artistry make it so appealing. 1871 was the year of the Great Michigan Fires. The exact causes of multiple large forest fires are uncertain, but especially high winds that year helped spread the fires.

This debate has been ragging – abet generally civilly for a couple days – Researchers Finally Replicated Reinhart-Rogoff, and There Are Serious Problems. Reinhart-Rogoff did mange to show that an economy could be grown with austerity – IF you massage the numbers. R and R finally respond, but hedge on the facts, agin. people are generally pretty forgiving when you make a mistake, get out in front of that mistake and apolgize or even hedge and say you see where there might be a problem and we’ll get back with some new information later. R and R had their chance at said public generosity as Paul Krugman notes, Reinhart-Rogoff, Continued

What Herndon et al did was find that the R-R results on the relationship between debt and growth were partly the result of a coding error, partly the result of some very odd choices about which data to exclude and how to weight the data that remained. The effect of fixing these lapses was to raise the estimated mean growth of highly indebted countries by more than 2 percentage points.

So how do R-R respond?

First, they argue that another measure — median growth — isn’t that different from the Herndon et al results. But that is, first of all, an apples-and-oranges comparison — the fact is that when you compare the results head to head, R-R looks very off. Something went very wrong, and pointing to your other results isn’t a good defense.

Second, they say that they like to emphasize the median results, which are much milder than the mean results; but what everyone using their work likes to cite is the strong result, and if R-R have made a major effort to disabuse people of the notion that debt has huge negative effects on growth, I haven’t noticed it.

…So this is really disappointing; they’re basically evading the critique. And that’s a terrible thing when so much is at stake.

Even if austerity worked at one or points in this or that country’s economic history there could be other factors  – very economically healthy nations helping with their debt is one thing. Recent history, the past six years, show that every country that has tried austerity – pointing a massive emphasis on paying down the debt, sometimes cutting taxes for corporations and the wealthy, have sunk back into recession.

According to the suit, Jenny Sanford allegedly caught the former governor and current congressional candidate on Feb. 3 using his cell phone for a flashlight as he left the house through a rear door. Court records also said McRackan enclosed a February 2011 letter sent to both Mark Sanford and local police warning him not to trespass on the property.

Mark Sanford won a runoff election on April 2 and is now facing a May 7 election against Democratic candidate Elizabeth Colbert Busch for the congressional seat representing the state’s 1st district. He was forced out of office in 2009 after his affair with Argentinian journalist Maria Belen Chapur was revealed.

The conservative base in S.C. were the same family values hypocrites that let him stay in office so long after the affair was discovered. They’ll vote for him if he is caught beating the family dog. Though Sanford needs moderates and independents to win, so say goodbye to your great comeback Mr. Sanford.

You can buy tea baggers, but for how long, Tea Party DOA: Only Dozens Attended Washington DC Tax Day Protests

On Freedom Works’ website, they announced that 1,000s were expected to their “New Fair Deal” protest at the U.S. Capitol on Tax Day (April 15th), which would be the “next phase of the Freedom Movement.” They hyped it as their “Get Out the Vote” machine. They had a slew of Republican representatives speaking as bait.

[  ]…Apparently Freedom Works/Tea Party has surrendered the pretense of being separate from the Republican Party. That’s probably for the best, since Matt Kibbe is the president and CEO of Freedom Works, and he is a former staffer for the Republican National Committee (RNC) and Freedom Works runs “boot camps” for supporters of Republican candidates. Back when Freedom Works was “Citizens for a Sound Economy”, they used to trick people into signing up as members by selling them insurance policies that required their membership.

[  ]…Still, only “dozens” attended. Perhaps now the Tea Party can go back to being what it once was, long before it got co-opted by the greedy corporatists behind Freedom Works, who find their most natural habitat within the Republican Party. It’s too bad the Tea Party wasn’t what it claimed to be, because we could use a real movement to cut the puppet strings with which big money and big business operate our legislators.

This is not to say the tea baggers and their sugar daddies the Koch brothers still don’t have a lot of pull in the Republican Partay. When you watch Rand Paul (R-KY) or Paul Ryan (R-WI) speak on TV look for the puppet strings.

April 16 Updates on Aftermath of Boston Marathon Explosions. As more pictures and video are collected it would seem they will contribute quite a bit to catching the perpetrator. With so many surveillance cameras in public places, so many people with video cameras and cell phone cameras, I wonder how someone can even consider the idea that they’ll get away with something like this.

The Worst Conservative Reactions To The Boston Bombings. No rest for those who not only want to score political points, but do not mind looking like morbid fanatics while doing so.

In case anyone missed this great post by Bruce Schneier, The Boston Marathon Bombing: Keep Calm and Carry On.