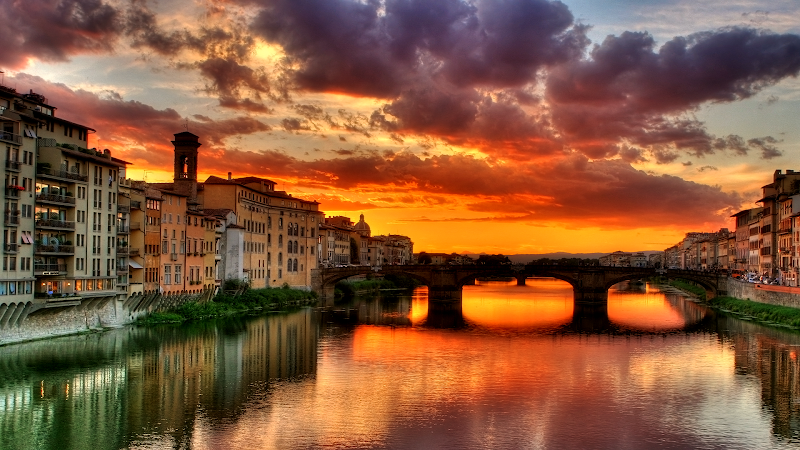 Timeline of the hunt for the Marathon attack suspects. 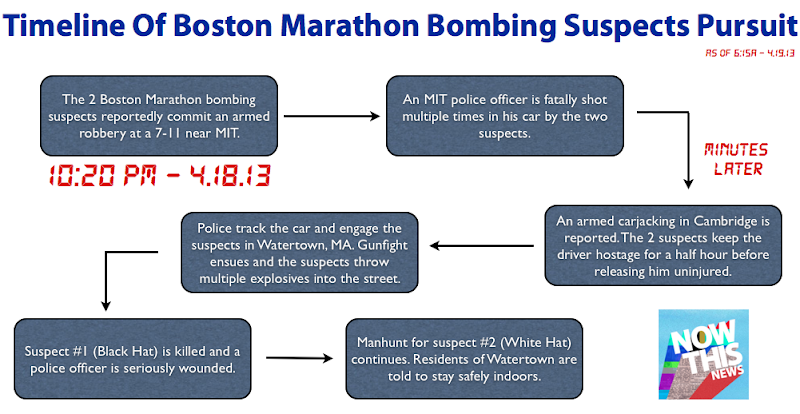 It seems simple enough unless, like me you stayed up all night following the bits and pieces of the news as events unfolded. At first it seemed like the death of the MIT police officer was not related, and than it was. Later one of the suspects was said to possibly be wounded, but in custody, with the 2nd ( white hat) suspect still on the run. It later turned out the first suspect was still alive when he arrived at the hospital, but died despite a half hour of attempts to revive him. As I post this I’m tracking a couple of Twitter news feeds from Boston and New York and the second suspect is still at large. The NYT just put up a good map with the series of events here, Updates on the Hunt for the Boston Bombing Suspects. One suspect in the Boston Marathon bombings is dead and another is being sought Friday. Twitter is definitely a better medium for following these types of news stories – though it pays to wait for verification before retweeting or blogging anything. Incredibly sad the MIT officer ( Sean Collier0 was murdered. I saw his picture and he was not much more than a kid himself. Sorry, but to me 26 is still very young. Getty has a lot of images up from last night.

I can’t say that I care if Glenn beck is on drugs or having some kind of mental break down, but his family might want to consider getting him into rehab or whatever he needs to get his mental state in the range of normal, Glenn Beck Is Undeterred By Reality On Saudi Nationals And The Boston Bombings

Hours after it was debunked, Glenn Beck continued to beat the drum of a conspiracy theory that the Obama administration is deporting a Saudi national who was behind the tragic bombings at the Boston marathon.

The conspiracy theory arose when Steve Emerson, a guest on Fox News’ Hannity, accused the Department of Homeland Security (DHS) of preparing to deport a Saudi national “person of interest” in the bombings at the Boston marathon. Right-wing blogs like Glenn Beck’s The Blaze, Breitbart.com, WND, and Infowars quickly latched on to the story, alleging President Obama wishes to cover up Saudi Arabian and Al Qaeda ties to the attack.

The myth pretends that a Saudi national who was hospitalized after sustaining injuries in the bombing — initially reported to be a “person of interest,” though he never was — is the same man DHS is allegedly in the process of deporting for visa violations.

And as everyone probably knows, the suspects were/are Chechens, What You Need To Know About Chechnya And The Boston Bombing Suspects

After an overnight chase, the media is reporting that the two suspects the FBI identified in Boston Marathon bombers are brothers from the restive Russian state of Chechnya. Here’s what you need to know about Chechnya and why that matters.

Russia is actually a much more diverse country than many realize, with several ethnic groups and states making up the larger Russian Federation. Chechnya is one of those states, home to an ethnic group known as Chechens. Following the dissolution of the Soviet Union in 1991, Chechnya attempted to become its own independent territory as many of the former Soviet states did. A similar struggle took place in neighboring Dagestan, which, much like Chechnya, is a Muslim majority state within Russia where the suspects are believed to have lived for a time before emigrating to the United States. The Russian federal government launched several all-out wars to keep Chechnya within the country. The last open conflict ended in 1999, with Russian President Vladamir Putin accused of using excessive force against civilians.

Moscow’s victory in the North Caucasus has never been fully cemented, due to an on and off struggle between the separatists in the states and the central government. Various social media accounts discovered possibly belonging to the two suspects indicate that both share a heavy interest in Chechen issues.

Several Chechen separatists groups still exist and have carried out many heinous attacks over the years. The most notorious of these was in the Russian city Beslan, when a Chechen group took an elementary school hostage in 2004. More than 300 hostages were killed during the incident, including 186 children. Chechen separatists were also behind a hostage taking at a Moscow theater, which ended with the Russian government accidentally killing 130 of those inside the building. Chechens have also been identified or suspected as jihadi fighters in conflicts around the world, including in Syria, while continuing to wage an insurgency against Moscow for the establishment of an Islamic state in Chechnya.

Unfortunately, this does not tell us very much at the moment. An ethnicity does not indicate any sort of defined motive or ties to any possible group or groups and law enforcement has yet to provide any confirmation of the current reporting. Chechen groups also have traditionally focused their ire on Russia rather than targeting the United States. Finally, given their lengthy residence it is difficult to discern what — if any — ties or sympathies the two brothers have to Chechen terrorist groups. The older of the brothers — Tamerlan Tsarnaev — has been in the United States since as early as 1992 as a refugee and in 2002 hoped to box for the United States at the Salt Lake City Olympics.

Not the police or FBI, but some of the media and various internet morons are responsible for this Saudi nonsense that has caused some hardship, The Saudi Marathon Man

What happened next didn’t take long. “Investigators have a suspect—a Saudi Arabian national—in the horrific Boston Marathon bombings, The Post has learned.” That’s the New York Post, which went on to cite Fox News. The “Saudi suspect”—still faceless—suddenly gave anxieties a form. He was said to be in custody; or maybe his hospital bed was being guarded. The Boston police, who weren’t saying much of anything, disputed the report—sort of. “Honestly, I don’t know where they’re getting their information from, but it didn’t come from us,” a police spokesman told TPM. But were they talking to someone? Maybe. “Person of interest” became a phrase of both avoidance and insinuation. On the Atlas Shrugs Web site, there was a note that his name in Arabic meant “sword.” At an evening press conference, Ed Davis, the police commissioner, said that no suspect was in custody. But that was about when the dogs were in the apartment building in Revere—an inquiry that was seized on by some as, if not an indictment, at least a vindication of their suspicions.

“There must be enough evidence to keep him there,” Andrew Napolitano said on “Fox and Friends”—“there” being the hospital. “They must be learning information which is of a suspicious nature,” Steve Doocy interjected. “If he was clearly innocent, would they have been able to search his house?” Napolitano thought that a judge would take any reason at a moment like this, but there had to be “something”—maybe he appeared “deceitful.” As Mediaite pointed out, Megyn Kelly put a slight break on it (as she has been known to do) by asking if there might have been some “racial profiling,” but then, after a round of speculation about his visa (Napolitano: “Was he a real student, or was that a front?”), she asked, “What’s the story on his ability to lawyer up?”

By Tuesday afternoon, the fever had broken. Report after report said that he was a witness, not a suspect. “He was just at the wrong place at the wrong time,” a “U.S. official” told CNN. (So were a lot of people at the marathon.) Even Fox News reported that he’d been “ruled out.” At a press conference, Governor Deval Patrick spoke, not so obliquely, about being careful not to treat “categories of people in uncharitable ways.”

We don’t know yet who did this. “The range of suspects and motives remains wide open,” Richard Deslauriers of the F.B.I. said early Tuesday evening.

As I write this Beck is insisting that President Obama be impeached, based purely on Beck’s hysterical delusions about this Saudi man.

Texas Plant May Not Have Been Inspected in Years, Despite Risks. A 2011 report highlighted hazards at the fertilizer plant, including tens of thousands of pounds of anhydrous ammonia. Safety inspection have improved since the Bush years, but due to budget cutbacks – you know the ones that conservatives said would not have any affect on anything, have impacted the health and safety of American workers, yet again.

The Atlantic is reporting the possibility there might be a third suspect.

(8:30 a.m. ET): Pete Wilson of WBZ-TV in Boston has already interviewed the uncle of the two suspects. When told what has happened to his nephews, he called one of them a “loser” and said the one who was killed “deserved it.” The uncle says the suspects came to the U.S. in 2000 or early 2001, but he has not spoken to them much since 2005. He says the last he heard of him was when Dzhokhar Tsarnaev had graduated from high school. When asked “What’s going through your mind?” the uncle responds, “I wish they never existed. They don’t deserve to live on this Earth.”

Authorities have identified the deceased suspect in the bombing of the Boston marathon, which killed three and injured more than 170, as Tamerlan Tsarnaev. A user by that name has posted a video to his YouTube playlist extolling an extremist religious prophecy associated with Al Qaeda. It is not clear yet whether the user is the same Tsarnaev as the deceased suspect.