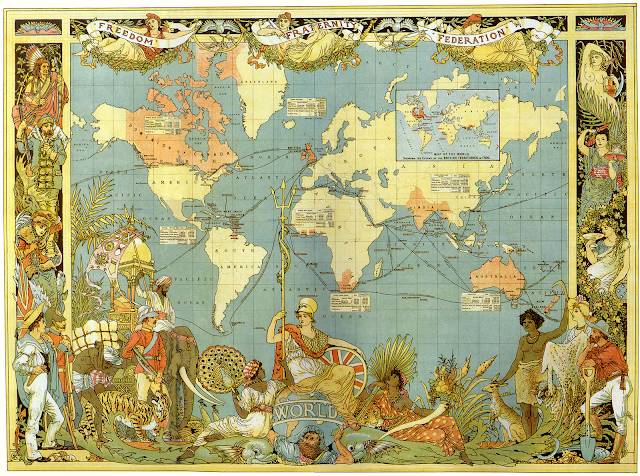 Antique World map with British Territories 1786. those territories are the light orange colored areas. The map doesn’t really give a proper perspective since in relation to land mass and the world’s oceans the territories seem small. This isn’t pick on the British day, I picked this map out from several possibility for today just because it was a little different from previously posted maps and because the border art work was so interesting. Though the map does fit in with a report from just this past autumn which found Britain has invaded all but 22 countries in the world in its long and colourful history. That is 22 lucky ducks out of 200. They’ve never invaded Luxemburg for some reason.

Why should the country’s best-known media reporter give a clear report on a media event involving him? He never worried about the ethics of working for two corporations that were supposed to be reporting on each other. The inherent corruption of what he did was a simple background fact, like the background fact of his dullness and mediocrity. There was a time when he had a platform that allowed him to command attention by breaking stories, before platforms proliferated and news breaks sped up; the news of his departure was broken by Dylan Byers at Politico. Latter-day Kurtz was boring except when he was laughable, and for a long time, none of that harmed him in the slightest.

It is tempting to nominate Kurtz as the poster boy for the seemingly incurable case of hackerness that permeates a media that jumps on bandwagons, panders, entertains, fires anyone marginally good and is so in love with its own power that it is falling behind Twitter ( which has it’s faults as well) is providing the news. But Kurtz is and always has been a self-important pimple among a field of self-important pimples. News readers, many with a very likeable persona, that were and are more concerned about offending people with actual news, so they don’t scare off advertisers, than practicing the profession of journalism. This is not an exclusively modern era problem. Some journalists have tried to live up to the title of the people’s watchdogs. Others care more about buying that expensive McMansion in Connecticut and hanging out at the right dinner parties. Kurtz was firmly entrenched in the dinner party beltway mentality and lifestyle. Where despite this recent shameless laziness and breach of ethics, he will stay.

If the war on drugs can’t stop Glenn Beck from getting high, what use is it, Glenn Beck: There’s A “Very Good Chance” The Houston Airport Shooting Was A “Setup” Like “The Burning Of The Reichstag” . Beck too is a journalist. A man who had fired a gun inside a ticketing area at Houston’s largest airport was killed after being confronted by a law enforcement official . Yep, Beck has nailed this one. The super secret society of gun safety advocates have a ring of suicidal nuts on call to sacrifice themselves for background checks. Beck is probably an expert on the Reichstag fire down to the number of matches used, but for those who are not, The Reichstag Fire

On February 27, 1933, the German parliament (Reichstag) building burned down due to arson. The government falsely portrayed the fire as part of a Communist effort to overthrow the state.

Using emergency constitutional powers, Adolf Hitler’s cabinet had issued a Decree for the Protection of the German People on February 4, 1933. This decree placed constraints on the press and authorized the police to ban political meetings and marches, effectively hindering electoral campaigning. A temporary measure, it was followed by a more dramatic and permanent suspension of civil rights following the February 27 burning of the parliament building.

Though the origins of the fire are still unclear, in a propaganda maneuver, the coalition government (Nazis and the German Nationalist People’s Party) blamed the Communists. They exploited the Reichstag fire to secure President von Hindenburg’s approval for an emergency decree, the Decree for the Protection of the People and the State of February 28. Popularly known as the Reichstag Fire Decree, the regulations suspended the right to assembly, freedom of speech, freedom of the press, and other constitutional protections, including all restraints on police investigations.

Justified on the false premise that the Communists were planning an uprising to overthrow the state, the Reichstag Fire Decree permitted the regime to arrest and incarcerate political opponents without specific charge, dissolve political organizations, and to suppress publications. It also gave the central government the authority to overrule state and local laws and overthrow state and local governments.

Beck is currently syndicated on radio, newspapers and has his own cable network. One which he is trying to force everyone to pay for, whether they want to watch Beck’s conspiracy channel or not.

Another conservative who thinks ethics is an obscure concept only practiced by the ancient Greeks, Supreme Court Justice Clarence Thomas: Obama is president because he’s approved by ‘elites’,

“You pick your person, any black person who says something that is not the prescribed things that they expect from a black person will be picked apart,” he added. “You can pick anybody, don’t pick me, pick anyone who has decided not to go along with it; there’s a price to pay. So, I always assumed it would be somebody the media had to agree with.”

So s SCOTUS justice makes it plain that he is hostile to the president, thus any legal issues on which he disagrees with the president. So much for the open-mindedness and fairness with which Thomas approached the law. Even if he did meditate himself into fairness mode for court decisions why express such open hostility and compromise his own ethics. ” any black person who says something that is not the prescribed things that they expect from a black person.” Is that supposed to be a joke. Thomas’s sacred conservative movement has vilified Obama and his race, going back to his 2008 run for president. Has Thomas read any of the news reports of the inflammatory language used against president Obama. The elites?  Would those be the 47% of the public that Thomas ideological brother Mitt Romney did not want to bother with. Thomas has set up the public relations fail-safe. If you agree with him, you’re a good American and a good Black American. If not, he is being victimized and the critic has been brainwashed. In Thomas World you cannot have an honest disagreement with him. This mental midget only became a justice because he would carry water for the conservative establishment and because of conservative identity politics. Friendship of Justice and Magnate Puts Focus on Ethics