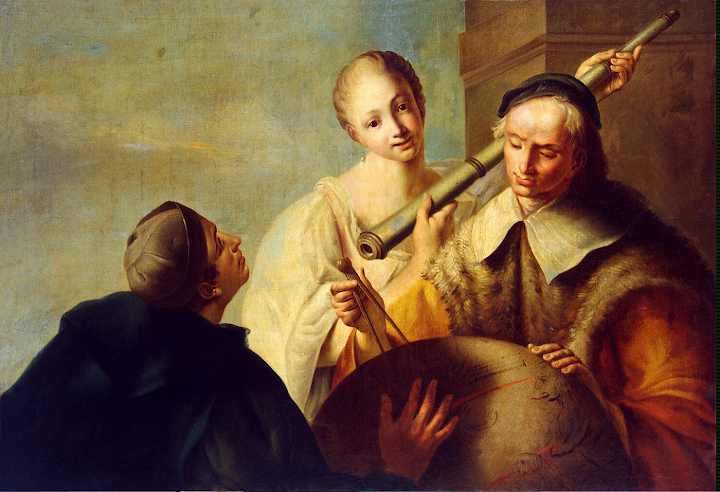 Lesson in Astronomy by Giuseppe Angeli. Italy, Late 1750s. I found this in a collection of paintings I have on CD. Teaching women science? Must have been some heretical liberals of the era.

By all means let’s have a national conversation about intimidating journalists, spinning the news and buying influence, How Far Did PBS Go To Avoid Offending David H. Koch?

“Park Avenue” includes a multifaceted portrait of the Koch brothers, telling the history of their family company and chronicling their many donations to universities and think tanks. It features comments from allies like Tim Phillips, the president of the Kochs’ main advocacy group, Americans for Prosperity, and from activists in the Tea Party, including Representative Michele Bachmann, of Minnesota, who share the Kochs’ opposition to high taxes and regulation. (It also contains a few quotes from me; in 2010, I wrote an article about the Kochs for this magazine, noting that they were funding much of the opposition to President Barack Obama by quietly subsidizing an array of advocacy groups.)

[  ]…According to Shapiro, Koch, who rarely speaks in public, passed on the roundtable offer, saying, “I may just want to take it in and watch it, and form an opinion.” He agreed to think about contributing a written response.

Shapiro acknowledges that his call to Koch was unusual. Although many prominent New Yorkers are portrayed in “Park Avenue,” he said that he “only just called David Koch. He’s on our board. He’s the biggest main character. No one else, just David Koch. Because he’s a trustee. It’s a courtesy.” Shapiro, who joined WNET six years ago, from NBC News, added, “I can’t remember doing anything like this—I can’t remember another documentary centered around New York and key people in the city, and such controversial topics.”

PBS has standards for “editorial integrity,” and its guidelines state that “member stations are responsible for shielding the creative and editorial processes from political pressure or improper influence from funders or other sources.” A PBS spokesperson, when asked if it considered WNET’s actions appropriate, said, “WNET is in the best position to respond to this query,” noting that member stations are autonomous.

They did air the documentary, but let the Kochs and Chuck Shumer (D) have a preview, which no one else received, and a rebuttal aired afterwards. Neither the Koch,s most certainly, or Chuck lack for the resources to reply to a documentary and when did investigative documentary film makers start having their works submitted to their subjects before the public. Behavior like this muddies the waters. Is the public seeing what the filmmaker intended to show or was it toned down to placate big money donors like the Kochs (they don’t say if Shumer donates to PBS). Another aspect is that far Right zealots are sitting on the boards of this local PBS stations at all. How many decisions are made that mean a documentary is never even made. This also slays another conservative snowball of lies about PBS being run by radical leftists. It is increasingly run by anyone with lots of money a little spare time. That is not a recipe for television in the public interests. This part of a long investigative piece so I recommend reading the entire article for the clash over the film “Citizen Koch.”