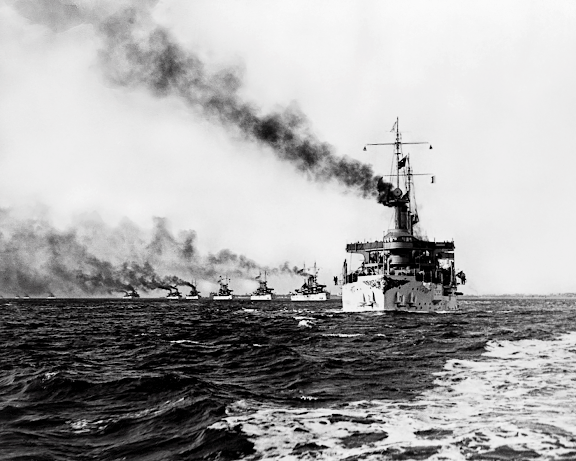 “Great White Fleet” Of The U.S. Navy. The “Great White Fleet” was a large fleet of American battleships which Theodore Roosevelt sent around the world on a goodwill mission.        December 1907. The fleet, composed of 16 battleships and their escorts, actually circumnavigated the globe from 6 December 1907 to 22 February 1909. While there was some international goodwill involved, the large and increasingly modernized fleet over the course of two years, was also meant as a demonstration of growing U.S. Naval power. Though had there been a Fox News and Drudge at the time, they probably would have called it an apology tour.

In the weeks after the Civil War ended, it was, some said, “a city of the dead.”

On a Monday morning that spring, nearly 10,000 former slaves marched onto the grounds of the old Washington Race Course, where wealthy Charleston planters and socialites had gathered in old times. During the final year of the war, the track had been turned into a prison camp. Hundreds of Union soldiers died there.

For two weeks in April, former slaves had worked to bury the soldiers. Now they would give them a proper funeral.

Soon, their voices would give way to the sermons of preachers, then prayer and — later — picnics. It was May 1, 1865, but they called it Decoration Day.

On that day, former Charleston slaves started a tradition that would come to be known as Memorial Day.

There is a photo at the link that goes with this very moving piece of U.S. story.

One has to wade through some of the notorious history of some radical conservative groups to get to the point, but it is a well made point, The IRS has had legal reason to investigate the religious right

At last week’s ways and means committee hearing on the Internal Revenue Service’s treatment of tax-exempt organizations, Representative Aaron Schock (an Illinois Republican) helped propel a new firestorm across conservative media: in addition to tea party groups, Schock maintained, anti-abortion organizations were also being subjected to “horrible instances of IRS abuse of power, political and religious bias, and repression of their constitutional rights”.

In one of the hearing’s most charged moments, Schock interrogated the outgoing acting IRS Commissioner, Steven Miller, about how IRS personnel asked one of the groups to describe its public prayers. Senator Charles Grassley (an Iowa Republican) joined the fray during the Senate’s finance committee hearings Tuesday.

For anyone who knows the history of the religious right, the possible revocation of tax-exempt status for claimed religious belief is a potent flashpoint. In his book, Thy Kingdom Come: An Evangelical’s Lament, religion historian Randall Balmer argues that contrary to conventional wisdom, which Balmar calls the “abortion myth”, evangelical voters were not propelled to political activism by the supreme court’s 1973 decision in Roe v Wade.

Instead, the issue that mobilized these voters was the IRS’s 1975 revocation of the tax-exempt status of the segregationist Bob Jones University. Rightwing religious architect Paul Weyrich told Balmer that it was “the federal government’s moves against Christian schools” that actually “enraged the Christian community”.

Bob Jones University claimed its ban on interracial dating and admission of students in interracial marriages was rooted in the Bible. It did not end its ban on interracial dating until 2000. The IRS’s decision – which went through protracted litigation that ultimately ended when the supreme court let the revocation stand – was in response to new IRS regulations and a 1972 Supreme Court case holding that educational institutions with racially discriminatory policies were not entitled to tax exemption.

“The Religious Right arose as a political movement for the purpose, effectively, of defending racial discrimination at Bob Jones University and at other segregated schools.”

Denying tax-exempt status to racially discriminatory schools – regardless of whether they claim their religion commands it – is not the only issue which the IRS can lawfully examine an applicant’s or organization’s activities. Under IRS regulations, tax-exempt organizations “may not have purposes or activities that are illegal or violate fundamental public policy”. The Bob Jones University case is just one example of the IRS applying this test. Its treatment of anti-abortion groups may be another.

Questioning anti-abortion groups – even the content of their prayers – could very likely have been aimed at determining whether these groups engaged in activities outside abortion clinics that ran afoul of the law. Because of the history of abortion clinic violence by those claiming a religious imperative, the IRS could have been attempting to determine whether the groups’ activities were in violation of the Freedom of Access to Clinic Entrances Act (Face), a 1994 law which prohibits the use of force, the threat of force, or physical obstruction to injure, intimidate or interfere with someone’s access to or provision of reproductive health services.

The exhibit was assembled by the groups’ attorneys at the Thomas More Society, a rightwing law firm that defended anti-choice activists in National Organization for Women v Scheidler. The National Organization for Women (Now) brought that lawsuit aiming to put an end to clinic violence that had included: “invasions, violent blockades, arson, chemical attacks and bombings of women’s health care clinics, assaults on patients, death threats and shootings of health care workers and administrators, including the murder of eight abortion providers.”

Although Now’s efforts to sue these protestors under federal racketeering laws was ultimately unsuccessful at the supreme court, the Thomas More Society still calls the litigation “a transparent attempt to gag pro-life activism at abortion clinics nationally”.

The Face statute was enacted while this litigation was ongoing. It would not be unprecedented, for example, for an anti-choice activist to pray that an abortion provider die. While we still do not know what the IRS’s thinking on this matter was, it is not entirely irrelevant or intrusive for the IRS to make such inquiries, including the nature of prayer.

Despite the hype and outrage about the Thomas More Society’s clients’ treatment by the IRS, the IRS ultimately did not penalize any of these organizations. But a religious right grudge against the IRS runs deep – back to its defense of Bob Jones University. It was just waiting to surface again.

If logic was part of the general reaction to the IRS and it’s action, one would think everyone would want them to make sure that all tax payers do not end up giving special tax exempt status to any group that violates the law. Conservatives might get some advantage, but liberal groups would as well. We’d be subsidizing the other sides political activity. In the case of the Thomas Moore Society’s clients, who have engaged in violence and various forms of intimidation. Well, there is a logic to the reaction of conservative groups, they can ratchet up a non-scandal to both rally the troops and to intimidate the IRS from doing its job. That more liberal groups might also get the same advantage doesn’t seem to factor into the equation.

I don’t know what kind of drugs Rand Paul (R_KY) is on, but they should not be legalized, Rand Paul: Obama ‘losing the moral authority to lead this nation’

“Nobody questions his legal authority,” the Kentucky Republican explained. “But I think he’s really losing the moral authority to lead this nation. And he really needs to put a stop to this.”

“If no one is fired over this, I really think it’s going to be trouble for him trying lead in the next four years,” Paul added.

Steven Miller, the IRS acting commissioner was fired. President Obama asked for Bush appointee Lois Lerner, the director of the tax-exempt organizations division at the Internal Revenue Service, has been placed on administrative leave. And conservative groups were not targeted. No conservative group was denied their 501(4) status.

The poor beleaguered victims are coming out of the woodwork. While doing so they demonstrate what the IRS was up against. Conservatives actually angry that all tax payers not be required to underwrite their activities, Groups Targeted by I.R.S. Tested Rules on Politics

When CVFC, a conservative veterans’ group in California, applied for tax-exempt status with the Internal Revenue Service, its biggest expenditure that year was several thousand dollars in radio ads backing a Republican candidate for Congress.

The Wetumpka Tea Party, from Alabama, sponsored training for a get-out-the-vote initiative dedicated to the “defeat of President Barack Obama” while the I.R.S. was weighing its application.

And the head of the Ohio Liberty Coalition, whose application languished with the I.R.S. for more than two years, sent out e-mails to members about Mitt Romney campaign events and organized members to distribute Mr. Romney’s presidential campaign literature.

Representatives of these organizations have cried foul in recent weeks about their treatment by the I.R.S., saying they were among dozens of conservative groups unfairly targeted by the agency, harassed with inappropriate questionnaires and put off for months or years as the agency delayed decisions on their applications.

But a close examination of these groups and others reveals an array of election activities that tax experts and former I.R.S. officials said would provide a legitimate basis for flagging them for closer review.

“Money is not the only thing that matters,” said Donald B. Tobin, a former lawyer with the Justice Department’s tax division who is a law professor at Ohio State University. “While some of the I.R.S. questions may have been overbroad, you can look at some of these groups and understand why these questions were being asked.”

The stakes are high for both the I.R.S. and lawmakers in Congress, whose election fortunes next year will hinge in no small part on a flood of political spending by such advocacy groups. They are often favored by strategists and donors not for the tax benefits — they typically not do have significant income subject to tax — but because they do not have to reveal their donors, allowing them to pour hundreds of millions of dollars into elections without disclosing where the money came from.

This is a summary of who qualifies for 501(4) status; 501(c)(4) organizations are generally civic leagues and other corporations operated exclusively for the promotion of “social welfare”, such as civics and civics issues, or local associations of employees with membership limited to a designated company or people in a particular municipality or neighborhood, and with net earnings devoted exclusively to charitable, educational, or recreational purposes….How is organizing political activists, distributing pamphlets composed of political advocacy and holding rallies advocating the election of specific candidates qualify under those provisions for status.