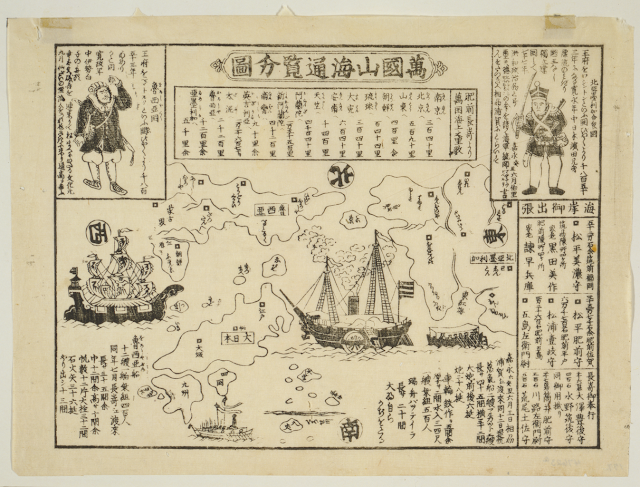 Japanese World Map, created between 1850-1900. The map is from a woodcut engraving and shows an enormous archipelago representing Japan at the center of the world. The interesting characters drawn in the insets are of a Russian soldier. The inset texts have a very brief history of each country.

House Republicans cheer as they pass farm bill without food stamps or a future, which is like the time they cheered for death for anyone who did not have health insurance. It is certainly the same as cheering for misery.

House Republicans cheered as they passed their special farm-not-food farm bill by the skin of their teeth Thursday afternoon. It wasn’t clear in the immediate run-up to the vote if Republicans would have the votes, and then Democrats forced repeated procedural votes as a protest against the Republican leadership’s decision to separate the farm subsidies part of the traditional farm bill from funding for nutrition programs.

The way forward is murky for the bill, since the Senate already passed a farm bill including both farms and food and isn’t likely to agree to strip out the Supplemental Nutrition Assistance Program in conference…

..In other words, that what they passed won’t pass the Senate or get the president’s signature is not the issue. This is about John Boehner, and his need to show he could get the House Republicans he ostensibly leads to pass something, anything, to make up for his farm bill failure last month. And he barely got it through: The 216-208 vote was only good enough for passage because some Republicans were absent.

In the bizarre alternate reality in which conservatives live, money to feed hungry people is money down a endless void. Be fore we proceed to see how food assistance is both good for the country in terms of economics and American ideals like humanitarianism, this bit from the far Right Heritage Foundation, Food Stamps Don’t Stimulate Economic Growth

The number of Americans on food stamps, or the Supplemental Nutrition Assistance Program (SNAP), is at historic highs, but some on the left—like Paul Krugman—think that’s not such a bad thing because, as they argue, food stamps “stimulate” the economy:

We desperately needed (and still need) public policies to promote higher spending on a temporary basis.… [E]ach dollar spent on food stamps in a depressed economy raises G.D.P. [gross domestic product] by about $1.70—which means, by the way, that much of the money laid out to help families in need actually comes right back to the government in the form of higher revenue.

Others on the left have made similar statements about SNAP stimulus. What’s the problem with this argument?

First, food stamps are intended to serve as a temporary safety net for those who face economic hardship, not as an economic stimulus. To justify food stamps as a stimulus to raise government revenue ignores the long-term economic consequences of welfare spending.

Maybe I’m giving them too much credit, but I think that is a pretty clever. She does not in anyway rebut the food stamp argument directly, she suddenly shifts, to a yea but it adds to the total national debt in the long term argument. That is not true either, but it gives the typical Fox News viewer or Breitbart reader the kind of mental rationale they need to repeat it to the point of nausea. First, just the numbers that would relate to being a drain on taxpayers,

When the money goes to people, they spend it and stimulate the economy on the order of $1.5 to 1.7 for every dollar spent. This means that the $78 billion spent on food stamps in 2011 led to $115 billion in overall economic activity.

That $37 billion is how tax payers get their money back, grocery stores make money and pay some taxes, food suppliers and farmers make money and pay some taxes. Oh, and of course this $37 billion helps people keep and create jobs. And frankly I don’t care about that and no one with a conscience should. Even if the program came out even $78 billion spent to $78 billion in economic activity, people need to eat. Conservatives do not seem to have much in the way of moral qualms about people going hungry, but most Americans do. Some more numbers and some stuff about people who conservatives think should just drop dead,

Advocates for the poor consider such cuts unconscionable. Food stamps, they argue, are far from lavish. Only those with incomes of 130% of the poverty level or less are eligible for them. The amount each person receives depends on their income, assets and family size, but the average benefit is $133 a month and the maximum, for an individual with no income at all, is $200. Those sums are due to fall soon, when a temporary boost expires. Even the current package is meagre. Melissa Nieves, a recipient in New York, says she compares costs at five different supermarkets, assiduously collects coupons, eats mainly cheap, starchy foods, and still runs out of money a week or ten days before the end of the month.

That average comes out to about $4.43 a day. According to conservatives and their brilliant insights into the human psyche, that kind of cash is what makes people lazy and want to live off gov-mint giveaways. So here we have a issue with a political movement that is not so much about politics as about the mental state of someone who wants misery for another human being who they see as the disgusting other. A few more numbers and humans,

So 54% of SNAP recipients are at a place in life where they have no boot straps to pull themselves up with. This should be embarrassing to conservatives who worship the absolute god-like perfection of the free market: how can that 40% work 40 or more hours a week and still not earn enough not to qualify for food assistance. Spoiler alert, I have part of the answer to that mystery: employers like Walmart, Target, McDonalds, Applesees, Sears. Taco Bell, Amazon and most retail grocery chains do not pay most of their employees a living wage, but they all have executive management that takes home millions – far more than they earned, deserve or need for a comfortable life. The same people Republican governors have cut taxes for and the same executives that Mitt Romney and Paul Ryan wanted yet another tax cut. And like a dovetail joint those tax cuts for people who rob from their employees to give to themselves we have the deep wisdom of the Koch brothers, Billionaire Koch Brother Says Eliminating The Minimum Wage Will Help The Poor.

The Kansas ad does not specifically mention the minimum wage, but it does claim that Americans earning $34,000 a year should count themselves as lucky, because that puts them in the top 1 percent of the world. “That is the power of economic freedom,” the ad concluded. Meanwhile, Charles and David Koch are the ones comfortably in the 1 percent, with a net worth of about 1 million times that figure. Watch the ad:

The ad cites a report from the Koch-funded Fraser Institute showing that “The United States used to be a world leader in economic freedom but our ranking fell. And it’s projected to decline even further.” (That same Fraser report interestingly ranks Hong Kong, Singapore, New Zealand, Switzerland, and Chile ahead of the U.S. Those places all have government-run health care, which the Kochs adamantly oppose.)

The Kochs were sent to elite colleges by their wealthy dad, from who they also inherited a large fortune. They did some really innovative stuff like buy some paper mills, some companies they make artificial carpeting synthesized from petroleum products. Most of their money now comes from their money. When you’re that rich and reach a certain threshold of wealth, your money by way of very safe investments and interests pays back huge sums of money. Listening to them give advice how how to get out of a low wage job is to listen to someone who is truly clueless. Someone who has never achieved anything on their own because they started out life, not a step up the ladder, but on top of the ladder charging fees to anyone who wanted to get on. The picture at this link says basically the same thing Lincoln said about labor being superior to capital, People like the Kochs, Romneys, Gold-Sachs, Bank of America, the Walton family, the Coors family, Sheldon Adelson take our ideas, they take our labor, they take our talent, they frequently take our health, they take our jobs during a takeover or export them to Asia, then turn around and call us the takers. It is close to the Antebellum plantation owners calling the slaves ungrateful for all the opportunities they provided.