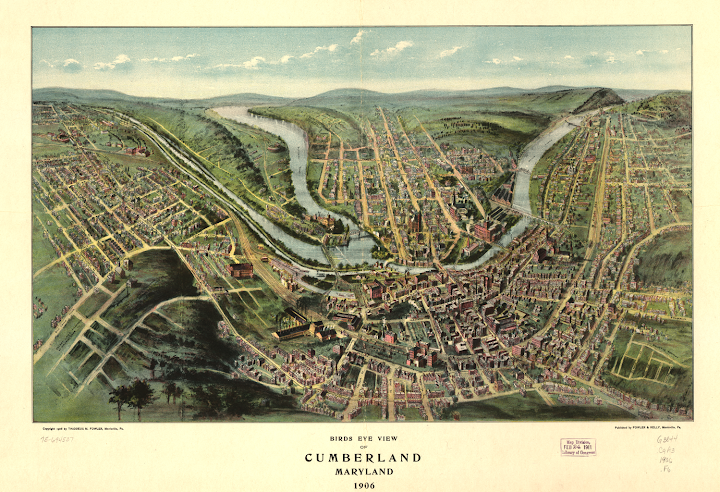 Located on the Potomac River in the western part of the state, Cumberland was an important transportation hub early in the nation’s history.

In 1906 Teddy Roosevelt, the “trust buster” was president ( he would never get the tea bagger vote). It was the year of the Great San Francisco earthquake, the year Upton Sinclair’s The Jungle was published and Congress passed the Meat Inspection Act ( something else that conservatives would defeat if up for a vote today).

Fighting Back Against Wretched Wages

OFTEN relegated to the background, America’s low-wage workers have been making considerable noise lately by deploying an unusual weapon — one-day strikes — to make their message heard: they’re sick and tired of earning just $8, $9, $10 an hour.

Their anger has been stoked by what they see as a glaring disconnect: their wages have flatlined, while median pay for chief executives at the nation’s top corporations jumped 16 percent last year, averaging a princely $15.1 million, according to Equilar, an executive compensation analysis firm.

Conservatives, most libertarians and some centrist Democrats have been saying for years that the reason we have to keep wages low is to be competitive – competitive to whom, Asia. That is and has been a race to the bottom for half of the U.S. The truth is slight more complicated, but not so much so that even your kool-aid drinking conservative neighbors can understand. By shipping jobs overseas and using that leverage to put downward pressure on wages, all the while taking away much of organized labor’s power, corporate dreams have come true. Corporate America is making record profits – that means they could be paying people a living wage and keeping jobs in the U.S. rather than do that, these corporations are putting massive sums of money in executive pockets and shareholders. Sure some of the middle-class gets some of that via their mutual funds – but most Americans do not benefit from this capital redistribution from workers to the wealthy. This is a good recent example of how the very wealthy are redistributing capital to themselves, A Pension Deficit Disorder: The Massive CEO Retirement Funds and Underfunded Worker Pensions at Firms Pushing Social Security Cuts

A major player in the national debt debate, the “Fix the Debt” campaign, is arguing that cuts to Social Security and Medicare are necessary to avoid economic disaster. Meanwhile, the corporations leading this campaign are contributing to Americans’ retirement insecurity by funneling enormous sums into their CEO retirement accounts while underfunding their employee pension funds.

* The 71 Fix the Debt CEOs who lead publicly held companies have amassed an average of $9 million in their company retirement funds. A dozen have more than $20 million in their accounts. If each of them converted their assets to an annuity when they turned 65, they would receive a monthly check for at least $110,000 for life.
* The Fix the Debt CEO with the largest pension fund is Honeywell’s David Cote, a long-time advocate of Social Security cuts. His $78 million nest egg is enough to provide a $428,000 check every month after he turns 65.
* Forty-one of the 71 companies offer employee pension funds. Of these, only two have sufficient assets in their funds to meet expected obligations. The rest have combined deficits of $103 billion, or about $2.5 billion on average. General Electric has the largest deficit in its worker pension fund, with $22 billion.

Although they have not remedied their own internal pension fund debts, the Fix the Debt CEOs say they have the solution for our national debt problems, which would include cuts to Social Security and Medicare.

In some cases, the Fix the Debt member corporations could eliminate their pension fund deficits with cash they currently have on hand. GE, for example, has more than $85 billion in liquid assets, according to their most recent 10-K report — enough to easily wipe out their $22 billion pension deficit. But rather than fixing their own internal debts, these CEOs have embarked on an aggressive effort to persuade policymakers and the public that savings from Social Security, Medicare, and Medicaid are essential to addressing the country‘s financial challenges. While these CEOs have offered few details on how they would cut costs with these reforms, it would likely be by limiting access to these programs paid for by all working Americans and by yet again raising the retirement age.

The corporate elite tell the public we have to pay sub-living standard wages or we’ll have to rise prices. What they could do is make reasonable salaries – say in the $85k to $125k range. I just suggested some heresy – hey this is America and corporate executives have to make millions or they won’t work. Fine, quite and lets usher is a new generation of hard working ethical executives they care about workers and America. Some conservatives bloggers have linked to this story – Exclusive: Signs of declining economic security, saying this is the result of Obama’s policies. They cannot put two and two together. Corporate profits at at all time highs and wages at all time lows. These companies could hire, they could pay more, but they are hoarding the money for themselves. Not exactly secret information, so conservatives continue to be the worse informed people on the planet. Read the comments on this post – if we made proof of general economic knowledge a requirement for voting, these people would not be allowed to vote. In one crazy-funny comment, one commenter goes off on how the communists are to blame. There is a very similar cognitive dissonance between what the Conservative base thinks about ” free enterprise” corporate America and what they thought about Bush and Iraq. They could not, and still cannot bring themselves to believe that the Bush administration betrayed America and they can’t believe these flag waving, “free enterprise” talking American businesses have betrayed America for more wealth than they will ever need and certainly never earned.