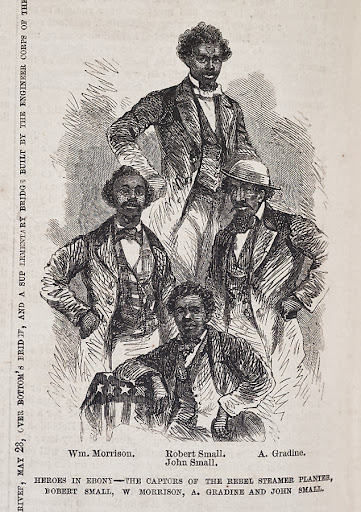 At 04:00 on 13 May 1862, while her captain, C. J. Relyea, was absent on shore, Robert Smalls, a slave who was Planter’s pilot, quietly took the ship from the wharf, and with a Confederate flag flying, steamed past the successive Confederate forts. He saluted the installation as usual by blowing the steam whistle. As soon as the steamer was out of range of the last Confederate gun, Smalls hauled down the Confederate flag and hoisted a white one. Then he turned Planter over to the USS Onward of the Union blockading force.

Besides Smalls, Planter carried 15 other slaves to freedom behind Union lines: seven crewmen, five women, and three children. In addition to the cargo of artillery and explosives, Smalls brought Flag officer Samuel Francis Du Pont valuable intelligence, including word that the Confederates had abandoned defensive positions on the Stono River.

While we’re delving into history, some quotes from former conservative Republican Secretary of Defense in the Bush administration, Donald Rumsfeld:

I can’t tell you if the use of force in Iraq today would last five days, or five weeks, or five months, but it certainly isn’t going to last any longer than that. – Interview with Steve Croft, Infinity CBS Radio Connect, November 14, 2002

But no terrorist state poses a greater or more immediate threat to the security of our people and the stability of the world than the regime of Saddam Hussein in Iraq. – Hearing Before the House Armed Services Committee, September 10, 2002 [9]. Quoted on March 14, 2004. Iraq was not a leading exporter of terrorism against the U.S. then or any other time, and they had no connections to al Qaeda or 9/11.

We know where they [Iraq’s WMD] are. They’re in the area around Tikrit and Baghdad and east, west, south, and north somewhat….I would also add, we saw from the air that there were dozens of trucks that went into that facility after the existence of it became public in the press and they moved things out. They dispersed them and took them away. So there may be nothing left. I don’t know that. But it’s way too soon to know. The exploitation is just starting. – Interview with George Stephanopoulos on ABC News This Week, March 30, 2003. This is my favorite quote from Rummy. There was never any WMD, Bush called off the hunt for them several years after he kicked out weapons inspectors and invaded Iraq.

Rumsfeld, like the other neocons never had much humility or honor. That is why he shamelessly weighs in on the current situation in Syria,  Rumsfeld: Obama Administration Hasn’t Made Case for Intervening in Syria

Rumsfeld explained that “there really hasn’t been any indication from the administration as to what our national interest is with respect to this particular situation.” (Yesterday, White House press secretary Jay Carney told reporters it is “absolutely in the national-security interests of the United States and the international community” to respond to the use of chemical weapons in Syria.)

In an interview with Neil Cavuto that will air Wednesday night on Fox Business Network, the former Bush secretary of defense blasted the administration as “mindless” for tipping its hand and said he “[couldn’t] imagine what they’re thinking” by giving President Bashar Assad’s regime “crystal clarity, with respect to what they attempt.”

Of course the current administration should listen to the shameless venal rantings of someone who has proven to be singularly incompetent in foreign policy and management of U.S. military forces. Give the country fifty years and scholars will be writing about how the Bush administration, the invasion of Iraq and the management of that invasion was one of the most egregious betrayals of the American people in the nation’s history. The only episode that comes close is Nixon and Kissinger’s malicious prolonging of the Vietnam War for political gain.

“Shaking Hands with Saddam Hussein,” Iraqi President Saddam Hussein greets Donald Rumsfeld, then special envoy of President Ronald Reagan, in Baghdad on December 20, 1983. This is after Iraq had used poison gas against Iran and the Kurds.