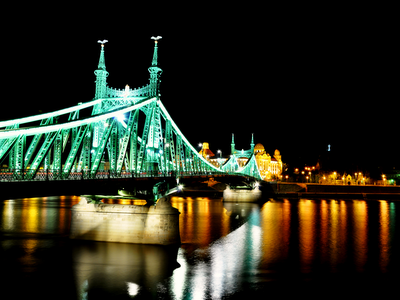 Rep. and conservative presidential candidate Michele Bachmann(R-MN) has voted for the wizbang Paul Ryan plan to gut Medicare twice. We all know how conservatives have a way of spinning their way out of trouble. Bachmann could have voted for the Ryan gutting plan once and just claimed she was tired and didn’t realize what she was doing. Fox News and Limbaugh would have covered for her. Having decided to shaft America’s seniors and children, and their families who would be stuck for the increased cost of RyanCare, Bachman, without the shame a descent moral human being should have Accuses Obama of Secret Medicare Plan

Representative Michele Bachmann of Minnesota, the latest candidate to join the Republican presidential campaign, suggested Friday that President Obama secretly wanted Medicare to go bankrupt so retirees would be forced to enroll in the new national health care law.

As  Mark Kleiman and   Jonathan Chait note if such a devious plot existed wouldn’t it be a conservative plot rather than vast conspiracy by our exasperatingly centrist president,

Medicare is a single-payer program — the kind liberals have always wanted for the non-elderly, but didn’t get. Turning Medicare into something like the Affordable Care Act would be to move them off single-payer health care and onto a regulated system of private insurance. That would be a conservative plot. I don’t think Obama is planning it, and if he were, it would prove he’s far more right wing than anybody imagined.

I’m trying to think where Bachmann dreamed up this notion. The essence of Tea Party ideology is that Medicare is virtuous and American as apple pie with Obamacare is a socialist plot. In that way, Bachmann’s fevered accusation makes sense.

That is the thing about conservative- tea smoker conspiracy theories. Just like ordinary falsehoods once you start a narrative based on nonsense, additions to the narrative become even more twisted. Chait nails it in the sense the tea smokers have backed themselves into a corner. They claim the ACA(ObamaCare) is a government take over of health care. That was named the lie of the year in 2010 by Politifact –  Lie of the Year: ‘A government takeover of health care’

But the law Congress passed, parts of which have already gone into effect, relies largely on the free market:

• Employers will continue to provide health insurance to the majority of Americans through private insurance companies.

• Contrary to the claim, more people will get private health coverage. The law sets up “exchanges” where private insurers will compete to provide coverage to people who don’t have it.

• The government will not seize control of hospitals or nationalize doctors.

• The law does not include the public option, a government-run insurance plan that would have competed with private insurers.

• The law gives tax credits to people who have difficulty affording insurance, so they can buy their coverage from private providers on the exchange. But here too, the approach relies on a free market with regulations, not socialized medicine.

PolitiFact reporters have studied the 906-page bill and interviewed independent health care experts. We have concluded it is inaccurate to call the plan a government takeover because it relies largely on the existing system of health coverage provided by employers.

It’s true that the law does significantly increase government regulation of health insurers. But it is, at its heart, a system that relies on private companies and the free market.

For those who live outside the mental bubble of conservatism know that a plan to move everyone on Medicare to private insurers would be a right-wing wet dream come true.

In a speech to the Republican Leadership Conference, Ms. Bachmann recounted how she attended a closed-door meeting at the White House and said the president was asked three times to produce his plan to address the financial burdens facing the Medicare program. She said the president’s “gift to senior citizens is to steal from them $500 billion out of Medicare.”

The anecdote, which Ms. Bachmann did not explain in detail or offer additional corroboration, was the latest example of a red-meat, crowd-pleasing declaration that has become a theme of her political rise – whether or not the statements withstand scrutiny. She drew enthusiastic applause as she pledged that her top priority – should she reach the White House – would be repealing the health care law.

Conservatives generally agree that Pawlenty blew an opportunity at last week’s debate to go after Romney because Obamacare is largely based on RomneyCare. Now Bachmann is attacking Obama from the liberal perspective. Claiming, without evidence of course, that Obama wants to undermine Medicare. Let’s take her at her word for a moment and assume she did ask for Obama’s plan to sure-up Medicare’s long-term financial structure. Again, she runs into the fact that she has voted for the RyanCare plan to end Medicare as we know it and Republican have offered up no plan of their own to make sure Medicare finances stay on track. Watching conservatives hide behind Obama because they lack solutions is, well has been, and continues to be tiresome.

The NYT’s Eric Lichtblau is usually not a bad reporter. We all have our bad days. He could blame the WSJ who is used as a source for this story, AARP Is Open to Cuts for Social Security Benefits

Mr. Rother said the group’s stance on possible cuts, which was first reported in The Wall Street Journal in Friday’s editions, should be seen less as a major change in position than as a reflection of the political and financial realities facing the Social Security system and the country as a whole.

“You have to look at all the tradeoffs,” Mr. Rother said, “and what we’re trying to do is engage the American public in that debate.”

He made clear that the group’s willingness to discuss cuts comes with conditions: Reductions in benefits should be “minimal,” they should not affect current recipients and instead should be directed “far off in the future,” and they should be offset by increases in tax-generated revenue.

Nonetheless, the group’s openness to the possibility of unspecified cuts was seen as a significant development by people on all sides of the Social Security question because of AARP’s influence on federal policies affecting older Americans, including Medicare, prescription drugs and many more.

AARP say that it does not favor cuts, AARP Has Not Changed Its Position on Social Security

“Let me be clear – AARP is as committed as we’ve ever been to fighting to protect Social Security for today’s seniors and strengthening it for future generations.  Contrary to the misleading characterization in a recent media story, AARP has not changed its position on Social Security.

“First, we are currently fighting some proposals in Washington to cut Social Security to reduce a deficit it did not cause.  Social Security should not be used as a piggy bank to solve the nation’s deficit.  Any changes to this lifeline program should happen in a separate, broader discussion and make retirement more secure for future generations, not less.

“Our focus has always been on the human impact of changes, not just the budget tables.  Which is why, as we have done numerous times over the last several decades, AARP is engaging our volunteer Board to evaluate any proposed changes to Social Security to determine how each might – individually or in different combinations – impact the lives of current and future retirees given the constantly changing economic realities they face.

There is the possibility of reading into that statement that they might be open to some changes, but not the kind of ‘cuts’ the NYT or the WSJ seemed to imply.

We had a lot of people who thought it made sense to get rid of cash machines and for a variety of reasons.

Other’s wanted to see America return to a simpler time when we all got our money from our friendly neighborhood banker who knew your name, smiled at you and gave little Billy a lollipop after which you could hop in your horse drawn carriage and return to your candle lit home.

One woman even said that ATM machines were bad for the environment.

Good point. The more ATMs we can eliminate, the more “green jobs” we can create by hiring bank tellers. I watched this with some trepidation, anxious and depressed by the possibility that they might not encounter a single person who sees this idiocy for the idiocy that it is. But no, fear not. There’s still some sense out there. Watch out for the older lady in the hat, in particular. “Do you know how that stupid that sounds?”

Conservatives just can’t do irony. The premise only works if you buy into the premise that President Obama ever said that ATM’s machines were one of the major causes of unemployment. Right-Wing Media Attack Obama For Accurate Remarks On Business’ Investment In Automated Machines

OBAMA: Well, I don’t think it’s a matter of me being unable to convince them to hire more people. They’re making decisions based on what they think will be good for their companies. A couple of things have happened. Look, we went through the worst crisis since the Great Depression. We are now in a process where the economy is growing again, and we’ve created 2 million jobs over the last 15 months. But it’s not as fast as it needs to be to make up for all the jobs that were lost.

The other thing that happened, though, and this goes to the point you were just making, is there are some structural issues with our economy where a lot of businesses have learned to become much more efficient with a lot fewer workers. You see it when you go to a bank and you use an ATM; you don’t go to a bank teller. Or you go to the airport, and you’re using a kiosk instead of checking in at the gate. So all these things have created changes in the economy, and what we have to do now — and that’s what this job council is all about — is identifying where the jobs for the future are going to be; how do we make sure that there’s a match between what people are getting trained for and the jobs that exist; how do we make sure that capital is flowing into those places with the greatest opportunity. We are on the right track. The key is figuring out how do we accelerate it. [NBC, Today, 6/14/11]

So Obama the alleged ‘elitest’ uses examples of automation that we can all relate to. The Right goes wild. If you’re ever at some kind of gathering and get cornered by a conservative, just jingle yours keys in their face. They’re become transfixed by the sound and the way the light twinkles off them. Needless to say president Obama was correct. Part of the problem with unemployment is technology is doing the work a human used to do,

NFIB Economist: Shift To Automated Production “Displaces A Lot Of Workers At Once.” In a June 9 New York Times article, National Federation of Independent Business (NFIB) chief economist William Dunkelberg cited the mechanization of farming as an example of mass worker displacement by automated production.

Harvard Economist: “If You’re Doing Something That Can Be Written Down In A Programmatic, Algorithmic Manner, You’re Going To Be Substituted For Quickly.”

NY Times: MIT Economics Professor Said That “Jobs In The Middle Are Being Lost To Automation And Outsourcing, And Now Job Growth At The Top Is Slowing Because Of Automation.” 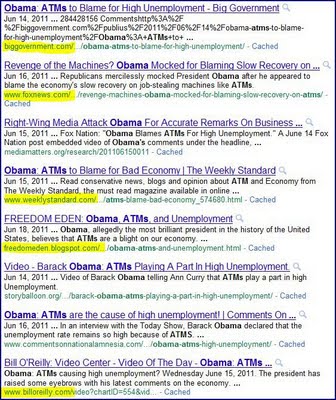 The Right goes spastic over ATM comments. As sad as that screen capture is, it goes on for several pages. The Right hates to be called dumb. Yet they go out of their way to give people cause to believe they are.