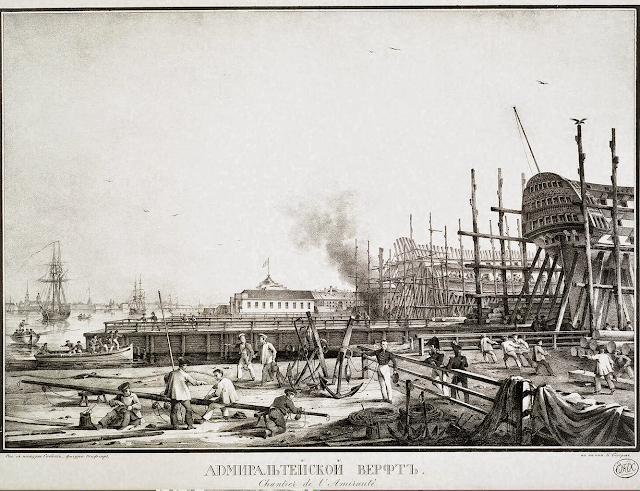 Admiralty Shipyard by Karl Petrovich Beggrov. Lithograph made in the 1820s. There are some warnings about the completeness of the information, but Wikipedia has an entry on Russian history from1796–1855. This shipyard print would have been during the time of the czars or tsars, before the Bolshevik Revolution.

While more details are bound to be revealed, it looks as though the investigation of the AP by the DOJ is not as clear cut as many liberals and of course, conservatives have claimed, Stop the Leaks

The United States and its allies were trying to locate a master bomb builder affiliated with Al Qaeda in the Arabian Peninsula, a group that was extremely difficult to penetrate. After considerable effort and danger, an agent was inserted inside the group. Although that agent succeeded in foiling one serious bombing plot against the United States, he was rendered ineffective once his existence was disclosed.

The leak of such sensitive source information not only denies us an invaluable insight into our adversaries’ plans and operations. It is also devastating to our overall ability to thwart terrorist threats, because it discourages our allies from working and sharing intelligence with us and deters would-be sources from providing intelligence about our adversaries. Unless we can demonstrate the willingness and ability to stop this kind of leak, those critical intelligence resources may be lost to us.

….The decision was made at the highest levels of the Justice Department, under longstanding regulations that are well within the boundaries of the Constitution. Having participated in similar decisions, we know that they are made after careful deliberation, because the government does not lightly seek information about a reporter’s work. Along with the obligation to investigate and prosecute government employees who violate their duty to protect operational secrets, Justice Department officials recognize the need to minimize any intrusion into the operations of the free press.

There have been differences of opinion, certainly over the last 13 years as to what the differences are between a whistle-blower and someone who has damaged national security. As some might remember the radical Right thought that conservative journalist Robert Novak did the country a service by helping the White House expose a CIA NOC agent and thus endangering her assets in the field as well. I know that with their history of lies and complete lack of conviction, conservative whining about freedom of the press are not worth addressing. Liberals who are concerned that the DOJ may have crossed a line have legitimate concerns. Though short of changing the laws that govern national security information, it does seem that the DOJ followed the rules. At least it seems that way until more information proves otherwise. This does not seem to be another scandal.

This is without doubt a scandal. he should be fired and be left to haunt the sacred halls of propaganda at some suitable outlet like Fox news or the Washington Free Beacon, A Right-Wing Mole at ABC News, Jonathan Karl and the success of the conservative media movement.

Karl came to mainstream journalism via the Collegiate Network, an organization primarily devoted to promoting and supporting right-leaning newspapers on college campuses (Extra!, 9-10/91)—such as the Rutgers paper launched by the infamous James O’Keefe (Political Correction, 1/27/10). The network, founded in 1979, is one of several projects of the Intercollegiate Studies Institute, which seeks to strengthen conservative ideology on college campuses. William F. Buckley was the ISI’s first president, and the current board chair is American Spectator publisher Alfred Regnery. Several leading right-wing pundits came out of Collegiate-affiliated papers, including Ann Coulter, Dinesh D’Souza, Michelle Malkin, Rich Lowry and Laura Ingraham (Washington Times, 11/28/04).

…During the rollout of Paul Ryan’s budget plan, Karl (1/26/11) gushed that the Republican media darling was “a little like the guy in the movie Dave, the accidental president who sets out to fix the budget, line by line.” And while Democrats were saying Ryan “is a villain,” Karl was clear about which side he was on: “Ryan knows what he sees…. Paul Ryan is on a mission, determined to do the seemingly impossible: actually balance the federal budget.” (Actually, even with its draconian spending cuts and absurdly optimistic economic assumptions, the Ryan plan still foresees a cumulative deficit of $62 trillion over the next half century—Congressional Budget Office, 1/27/10.)

Most liberals, despite recurring cases of back pain, continue to bend over backwards to be fair. So let’s say we apply the three strikes rule to Karl. Well, he is on to strike 12 or 14. he has rolled over, laid waste to and made an absurd caricature of anything resembling journalistic ethics. Yet he still has his multimillion dollar gig at ABC. This is what conservatives consider getting ahead on merit. Parrot factless talking points, be unethical and incompetent – get a chauffeur driven Cadillac Escalade to carry your rewards to the bank