Antique World Map of Continents and Oceans,1700 CE. This was done by English mathematician and clergyman Edward Wells (1667-1727).

Of course Republicans have been trying to shift blame for their management of the economy from 2000 to 2008 on Democrats. Conservatives despite all the shrill noise to contrary have never been big on accepting responsibility. There hubris tends to be a big hurdle to having enough humility for Republican politicians and pundits to accept responsibility. Not to let them off the hook, but the conservatives next door, your neighbors and co-workers just have a difficult time assimilating reality. They watch Fox and they are assured that all the wacky stuff the pundits put out is true. Cutting through all the sub-divisions of conservative Republicans is the belief that some how Obama is responsible for the slow recovery. That narrative is running parallel to the narrative of conservative governors who claim they are making steady progress in their states. So we have to believe two competing conservative narratives. The country is doing so badly only a new president can turn things around and the part of the country that has conservative governors is going great so reelect them. Romney has noticed and asked that Republican governors stop touting any economic positives because it is hurting his campaign – Discussing The Economic Recovery Will Hurt My Election Chances. Some liberals have expressed disappointment in Obama as well. They might want to back up and consider, along with your average Main Street conservative, the measures conservatives have taken to weaken and stall the economic recovery.  Economists Agree Romney’s Plan Would Spark a New Recession

The private sector of the U.S. economy has added jobs for the past 27 months in a row, corporate profits have hit an all-time high, and the U.S. auto industry is back, with manufacturers consistently adding jobs for the longest period since the mid-1990s. Still, as President Barack Obama has said, “we are still not creating (jobs) as fast as we want.” And the biggest hurdle to swifter job creation is the embrace of austerity by Republicans in Congress who refuse to implement measures that would boost employment—a position supported by their presidential candidate, former Massachusetts Gov. Mitt Romney.

This austerity has real—negative—economic consequences. Increasingly, economists are pointing to austerity as a key reason for too-slow job creation. Despite considerable warnings from economic experts that government spending is critical to creating jobs, conservative leaders in Congress are inflicting these austerity programs on us at the federal, state, and local level. According to Yale economists Ben Polak and Peter Schott:

Without this hidden austerity program, the economy would look very different. If state and local governments had followed the pattern of the previous two recessions, they would have added 1.4 million to 1.9 million jobs and overall unemployment would be 7.0 to 7.3 percent instead of 8.2 percent.

Even though austerity is not good for the U.S. economy, this is exactly the economic policy promoted by Romney. His ideologically driven agenda would continue the failed supply-side policies of President George W. Bush by giving even more tax breaks to the rich—a policy that has not generated strong and sustained economic growth—while slashing investments in our middle class and America’s future competitiveness, such as education, public safety, basic research and development, and infrastructure upgrades. Romney’s plan for spending cuts is deliberately vague, but it is clear that it will require drastic cuts to programs that support.

Republicans and their policies – with help from a few democrats as usual – caused the Great Recession. Once President Obama was elected they saw that as a golden political opportunity. They would pull every political trick, take advantage of every Senate parliamentary maneuver, to stall job creation and to make the recession less painful for American families. Let’s say that some terrorists had caused the USA to lose trillions in GDP and then did everything they could to keep the country from an economic recovery – causing immeasurable hardship for millions of American families. But foreign terrorists did not do that. Republicans did. If conservatives manage to convince enough people, as they did in the 2010 mid-terms, that they are the answer to the problems they largely created and exacerbated, it should not surprise anyone. For whatever reasons Republicans seem almost immune from the consequences of economic terrorism. They can heap as much abuse on the USA as they like and a good deal of the public says thank you, may I have some more abuse please. While they would rush to hang a foreign terrorist who had done this much damage. Conservatives have taken the great recession, held it up to the light, said see this, this is why the working and middle-class have to make sacrifices in programs like Medicare and Social Security. Let’s not make the bankers pay for what they did, the poor things, they’re ” job creators”. The consequences of Romneynomics?

The result would bring more austerity and less growth. According to an analysis by the Center on Budget and Policy Priorities, “by 2022, if the [federal] budget had to be balanced while taxes were cut,” which is Romney’s goal, “the proposals would require cutting entitlement and discretionary programs other than Social Security and core defense by more than half.” Specifically, the Center for Budget and Policy Priorities estimates that Romney’s proposals would deplete Medicare, Medicaid, and the Children’s Health Insurance Program by $3.4 trillion over the next 10 years. In addition, the nonpartisan think tank says that, under Romney’s plan, compensation payments for disabled veterans would be cut by one-quarter, and 13 million people struggling to put food on the table for their families would be kicked off the Supplemental Nutrition Assistance Program.

That last block quote is an appeal to morality. To the best values of human nature. An appeal to decency. That argument will never work on the conservative movement. They in fact cherish, applaud and take pride in the philosophy of nihilism, misery and death. In a recent interview Republican Michelle Malkin showed her genuine core feelings about those Americans who do real work for a living,

… in the interview, Malkin slammed President Obama’s supporters. “Romney types, of course, are the ones who sign the front of the paycheck, and the Obama types are the one who have spent their entire lives signing the back of them,” she said.

Malkin is responding to an unimpeachably factual statement made to Charlie Rose in a recently released interview clip:

PRESIDENT OBAMA: … if you’re the head of a large private-equity firm or hedge fund, your job is to make money. It’s not to create jobs. It’s not even to create a successful business. It’s to make sure you are maximizing returns for your investor. Now, that’s appropriate. That’s part of the American way. That’s part of the system. But that doesn’t necessarily make you qualified to think about the economy as a whole….

Malkin adds [  ]……. I think that there’s an underlying contempt for the profit motive that drives this economy, that somehow only [makes air quotes] “successful” businesses are those that avoid evil things like cost-cutting, which, of course, is what Romney is under — attacked by by this tape.

As usual Malkin, like any conservative pundit on wing-nut welfare does not produce proof of Obama’s anti-capitalism polices. Malkin only trades in the unsupported assertion. They feel their opinions, they say it, it magically becomes reality. Never mind that conservative economic policies have made work pay less and just having wealth pay more,  CEO Pay Increased 127 Times Faster Than Worker Pay Over Last 30 Years. Conservatives have trended this way for fifty years, but what we are seeing now is that Republicans have become complete captives of the wealthy crazy elite. Federal taxes are the lowest they have been since the 1950s, Obama has given small business 17 tax cuts. Still not good enough. One of the reason conservatives think they will never be low enough is that we still have a safety net. As long as we have food assistance, unemployment insurance and Medicare, taxes will be too high in the mind of conservatives. Government is here exclusively to build missiles ( missiles are necessary,but let’s have a weird fetish about them) not for providing things like minimal sustenance for the disabled. Government should not be protecting your family from food poisoning or bad drugs, we can all just go buy our own chemistry sets. 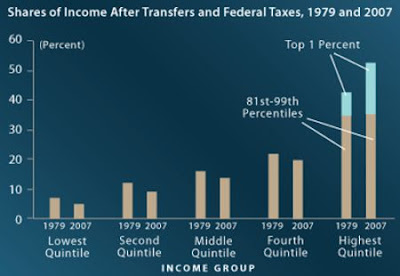 For the most part we already have a Romney economy,

Each of America’s two biggest economic crashes occurred in the year immediately following these twin peaks—in 1929 and 2008. This is no mere coincidence. When most of the gains from economic growth go to a small sliver of Americans at the top, the rest don’t have enough purchasing power to buy what the economy is capable of producing. America’s median wage, adjusted for inflation, has barely budged for decades. Between 2000 and 2007 it actually dropped. Under these circumstances the only way the middle class can boost its purchasing power is to borrow, as it did with gusto.

Part of the issue with how Malkin and Romney see how the economy should work is what we value as a nation. Conservatives feel that wealth should be rewarded. Not because wealth concentrated in the hands of the top 10% produces people who just sign the back of a paycheck, but because conservatives believe this is how destiny should work. Workers should act like grateful wage slaves and the elite – who by nature of their unearned wealth – are the truly blessed, virtuous and entitled. You know who else thought like that. The monarchists of Medieval Europe. We should all conveniently forget that progressive economic policies produced the greatest expansion of the middle-class in history. So if you’re an American worker – who wants your share of the capital you produce you just a socialist, not a capitalist who is getting the shaft from the plutocrats.

“Labor is prior to, and independent of, capital. Capital is only the fruit of labor, and could never have existed if labor had not first existed. Labor is the superior of capital, and deserves much the higher consideration.” – Abraham Lincoln

Romney may have committed felony lying about role with Bain

Oh but it gets worse. As Factcheck.org so graciously pointed out, if Mitt Romney lied in any federal forms about the extent of his role with Bain, Romney may have committed a felony.  From Factcheck.org:

If the Obama campaign is correct [that Romney remained at Bain past 1999], then Romney is guilty of lying on official federal disclosure forms, committing a felony. But we don’t see evidence of that.

Here’s what Romney has said:

Romney’s signature appears on the line that states: “I certify that statements I have made on this form and all attached schedules are true, complete and correct to the best of my knowledge.”

Making false statements to the federal government is a serious crime (under 18 USC 1001) carrying possible fines and up to five years in federal prison.

This came in today, Romney Adviser: Romney Not Responsible For Bain Because He ‘Retired Retroactively’. If the whole run to be the crooked CEO of American does not work out maybe Romney and friends could start a franchise selling unicorns.

Romney is also specified as being on “As member of the Management Committee of each of BCIP and BCIP Trust” in other SEC filings done in 2001, three years after supposedly having zero say in Bain operations.