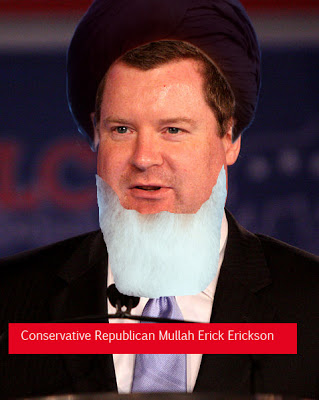 Erick Erickson, the conservative blogger and Fox News personality, became the most hated man on Twitter today after responding to a much-discussed Pew survey on female breadwinners by saying that science says that men should dominate women (to be fair to Erickson, Juan Williams and Lou Dobbs expressed equally retrograde sentiments on the very same segment, but have largely escaped the drubbing).

Erickson tried to clear things up with a blog post this afternoon, but only made matters worse by showing how much he doesn’t get it. The missive started off poorly, with some whining about how feminists and “emo lefties have their panties in a wad” (pro-tip: when accused of sexism, don’t reference your opponents’ panties while mounting your defense) and only got worse from there.

First there was a science lesson:

I also noted that the left, which tells us all the time we’re just another animal in the animal kingdom, is rather anti-science when it comes to this. In many, many animal species, the male and female of the species play complementary roles, with the male dominant in strength and protection and the female dominant in nurture.

There are also species where males castrate themselves before sex to avoid being eating alive by females. Perhaps Erickson would like to experience that — you know, because science?

Erickson goes on to equate all female breadwinners with single mothers, and then to assume that the outrage directed at his comments was about some kind of politically correct effort to destroy families…

First of all, Freedom. We live in a democratic republic. We have a free market economy. It is not for conservatives to decide who should make the most based on strange criteria  such as gender, race or religion. If some women make more money than men or have more power in their relationships, that is their personal business. It is a result of their circumstances, life choices and some luck, good or bad. You know where you can here the same conservative misogynistic nonsense? From Iranian fundamentalists. Robbed of simple pleasures – Women’s rights in Iran

Equality does not take precedence over justice… Justice does not mean that all laws must be the same for men and women. One of the mistakes that Westerners make is to forget this…. The difference in the stature, vitality, voice, development, muscular quality and physical strength of men and women shows that men are stronger and more capable in all fields… Men’s brains are larger…. Men incline toward reasoning and rationalism while women basically tend to be emotional… These differences affect the delegation of responsibilities, duties and rights.
— Hashemi Rafsanjani, Iranian Parliament Speaker, 1986

It is as though Erickson read that and simply repeated it in his own words ( with  Juan Williams and Lou Dobbs nodding in agreement). From 1998, Women in Iran – A look at President Khatami’s first year in office

Iranian women were strong participants in the 1979 revolution, but fundamentalists, led by Ayatollah Ruhollah Khomeini, seized control after the revolution. Once in power, the fundamentalists betrayed the work and humanity of women by implementing a crushing system of gender apartheid. Fundamentalists built their theocracy on the premise that women are physically, intellectually and morally inferior to men, which eclipses the possibility of equal participation in any area of social or political activity. Biological determinism prescribes women’s roles and duties to be child bearing and care taking, and providing comfort and satisfaction to husbands.

Men were granted the power to make all family decisions, including the movement of women and custody of the children. “Your wife, who is your possession, is in fact, your slave,” is the mullah’s legal view of women’s status. (2) The misogyny of the mullahs made women the embodiment of sexual seduction and vice. To protect the sexual morality of society, women had to be covered and banned from engaging in “immodest” activity.

I don’t know who first used the term, but Erickson, Dobbs and Will aims are examples of the observation that many conservatives embrace an American Taliban mentality. With the attitude that only men can make decisions, only men can lead, only men can think clear thoughts, only men should be allowed to compete in the commercial marketplace, and the marketplace of ideas. I do not see how men do anything but profit from equality with women. Unless you’re an American or Iranian conservative who has a fundamentalist fixation on controlling every aspect of someone’s life. More on Erick’s dream world,  Mullahs’ parliament adopts bill prohibiting issuance of passport for single women

On November 13, mullahs’ parliamentary Commission on National Security and Foreign Policy, in consideration of the Passport Bill, had adopted this article for “single women under 40” (IRGC news agency – Fars). However, mullahs’ parliament declared on December 11 that mention of a particular age has been dropped in this bill. Safar Naimi, a mullahs’ parliamentarian said: “It is the belief of most members of the committee that issuance of passport for women, whether single or married, should be conditioned on the approval of her guardian or the Shariat judge; meaning that a single woman would need approval from her guardian father, grandfather or Shariat judge; and a married woman has to have the approval of her husband, guardian or the Shariat judge”.