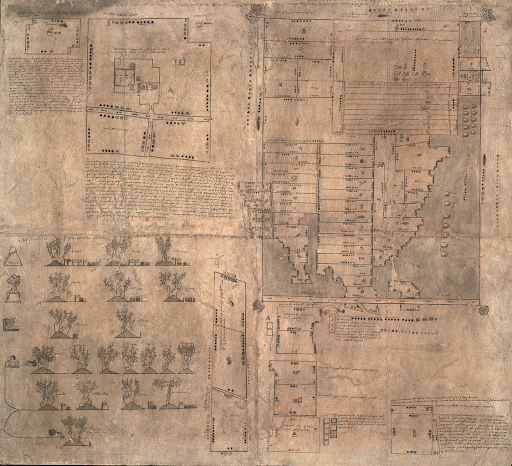 The Oztoticpac Lands Map, c1540. This is both a map and Mexican legal document concerning a lawsuit involving the estate of Don Carlos Ometochtli Chichimecatecotl, an Aztec lord and one of the many sons of Nezahualpilli, ruler of Texcoco. Don Carlos was charged with heresy and publicly executed by the Spanish authorities on November 30, 1539. An old political trick, still in use today. Though political hitmen do not tend to have their victims hanged, if someone has something the powers that be want, trump up some spurious charges to get rid of them. The outcome of that lawsuit is not known. The map-document is historically important as the lower left is a gloss of European fruit trees and grape vines grafted onto indigenous tree stock, the only such image of this agricultural technique known to exist in any Mexican indigenous pictorial document.

On Voting Rights, A Decision As Lamentable as Plessy or Dred Scott

Let’s be clear about what has just happened. Five unelected, life-tenured men this morning declared that overt racial discrimination in the nation’s voting practices is over and no longer needs all of the special federal protections it once did. They did so, without a trace of irony, by striking down as unconstitutionally outdated a key provision of a federal law that this past election cycle alone protected the franchise for tens of millions of minority citizens. And they did so on behalf of an unrepentant county in the Deep South whose officials complained about the curse of federal oversight even as they continued to this very day to enact and implement racially discriminatory voting laws.

In deciding Shelby County v. Holder, in striking down Section 4 of the Voting Rights Act, the five conservative justices of the United States Supreme Court, led by Chief Justice John Roberts, didn’t just rescue one recalcitrant Alabama jurisdiction from the clutches of racial justice and universal enfranchisement. By voiding the legislative formula that determines which jurisdictions must get federal “preclearance” for changes to voting laws, today’s ruling enables officials in virtually every Southern county, and in many other jurisdictions as well, to more conveniently impose restrictive new voting rules on minority citizens. And they will. That was the whole point of the lawsuit. Here is the link to the ruling.

In a 5-4 ruling over liberal dissent, the Supreme Court today declared “accomplished” a “mission” that has become more, not less, dire in the four years since the justices last revisited the subject. They have done so by focusing on voter turnout, which surely has changed for the better in the past fifty years, and by ignoring the other ruses now widely employed to suppress minority votes.

As expected there are some specious conservative rationale for bringing back part of Jim Crow; well now Congress can just go back and fix the law. This is a weird circular argument. The Voting Rights Act was the law that fixed disenfranchisement of some voters. Though mainly thought of as a civil rights laws concerning minority voters, the law also protected students and women voters. To go back and draft a new version of the same law is the legal equivalent of a hamster wheel. Repealing Section 4 places more burden on some voters, including African-Americans, Latinos, the elderly and women – women as a group frequently have name changes because of marriage. That means restrictive laws, enforced by people who like Jim Crow-lite are more likely to turn away a female voter because, hey, the name on your new license is different from the one on your voter registration. Conservatives may see some short term gains in like the 2014 mid-terms, but if Democrats run on it, and they will, those gains might be canceled out by a very motivated base of more progressive voters – The Supreme Court’s Voting Rights Decision Is a Poison Chalice for the GOP. Though Josh Green is right as far as he goes, he does not address changing demographics. Texas is going to be purple by 2016. Very good chance a good Democratic candidate can take Texas in 2016. Florida, a state that drifts between purple and blue is, after the Romney-Ryan plan to gut Medicare, pretty much a lock in 2016 for Democrats. Scott Walker and the Koch brothers better take lots of pictures to enjoy the memories because Wisconsin, with its working class American base will go back to its progressive roots. That leaves conservatives with an ever shrinking base of hardcore regressive southern conservatives. Recently someone said that Republicans were the party of the Confederacy. After which there was the usual round of faux outrage. The conservatives on the SCOTUS just made the Confederacy accusation all that much obvious than it already was. Since I don’t believe in crystal balls it is nice that the regressive conservatives in Texas did not make it necessary to put out some invalid predictions resulting from striking down Section 4. We know what will happen because it is already happening, Two Hours After The Supreme Court Gutted The Voting Rights Act, Texas AG Suppresses Minority Voters

Just two hours after the Supreme Court reasoned that discrimination is not rampant enough in Southern states to warrant restrictions under the Voting Rights Act, Texas is already advancing a voter ID law and a redistricting map blocked last year for discriminating against black and Latino residents. Texas Attorney General Greg Abbott issued a statement declaring that both measures may go into effect immediately, now that there is no law stopping them from discriminating against minorities.

In 2012, the Justice Department blocked these measures under Section 5 of the Voting Rights Act. Federal courts agreed that both the strict voter ID law and the redistricting map would disproportionately target the state’s fast-growing minority communities. Still, Texas filed an amicus brief with the Supreme Court over the Voting Rights Act case complaining that the DOJ had used “abusive and heavy-handed tactics” to thwart the state’s attempts at voter suppression.

In the case of the new electoral map, a panel of federal judges found that “substantial surgery” was done to predominantly black districts, cutting off representatives’ offices from their strongest fundraising bases. Meanwhile, white Congress members’ districts were either preserved or “redrawn to include particular country clubs and, in one case, the school belonging to the incumbent’s grandchildren.” The new map was also drawn in secret by white Republican representatives, without notifying their black and Latino peers. After the court blocked the map, the legislature approved small changes to appease Democratic lawmakers last week. Now that they are free to use the old maps, however, Gov. Rick Perry (R) could simply veto the new plan and use the more discriminatory maps.

The strict photo ID requirement blocked by the DOJ and a federal court would require Texans to show one of a very narrow list of acceptable photo IDs. Expired gun licenses from other states are considered valid, but Social Security cards and student IDs are not. If voters do not have an ID — as many minorities, seniors, and poor people do not — they must travel at their own expense, produce their birth certificate, and in many cases pay a fee to get an ID.

Thanks to the Supreme Court, the DOJ no longer has any power to block these laws, even with the backing of federal judges who found blatant discrimination. Under the remaining sections of the Voting Rights Act, individuals may sue to kill these measures, but only after they have gone into effect and disenfranchised countless Texans of color.

According to the 2010 Census, non-Hispanic whites have become a minority in Texas, down from 52.4 percent to 45.3 percent of the population. Latinos have accounted for 65 percent of the state’s population growth over the past decade. Projections show that the eligible voter pool will shift to roughly 44 percent white voters and 37 percent Hispanic voters by 2025. Faced with this demographic reality, conservatives have alternated between changing their messaging to appeal to Latino voters, who overwhelmingly supported Democrats in 2012, and making it harder for them to vote.

The examples roll in almost daily of why conservatives of color like Ben Carson ‘Racist’ white liberals want me on ‘the plantation’ and Herman Cain ‘I Left The Democrat Plantation A Long Time Ago’, are not just politically clueless, but malevolent denialists. They remind me of George W. Bush who read the Presidential Daily Brief that said Bin laden likely to attack and did nothing. Reality, decency and acting for the common good, just doesn’t penetrate the conservative mind. The movement itself suffers from a permanent case of cognitive dissonance.

Speaking of Texas. Not everyone there is a knuckle dragger,

The victory was the result of an extraordinary effort from Wendy Davis, a Democratic state senator from Fort Worth, who, in a back brace, filibustered the measure for nearly 11 hours — and would have kept going had Republicans not shut her down, saying her speech strayed from the chamber’s filibuster rules.

…As for the bill that Davis and her allies helped kill, GOP lawmakers in the state intended to ban all abortions after 20 weeks of pregnancy, and close all but five of the 42 abortion clinics in Texas.

For proponents of reproductive rights, last night offered a genuinely inspirational moment, but it’s worth noting that this fight may soon have another round.

Texas Gov. Rick Perry (R), who’s eager to sign the sweeping new restrictions, may very well call state lawmakers back to work for another special session, at which point the same proposal will be considered once more.

Dewhurst hinted that this scenario is, in fact, quite likely. “It’s over. It’s been fun. But see you soon,” he said.

Regardless, I don’t think anyone will soon forget what we saw from Wendy Davis, or just how many people were eager to #StandWithWendy.

Davis tweeted her victory. Thus far she has 17,000 retweets. Way to go Wendy.