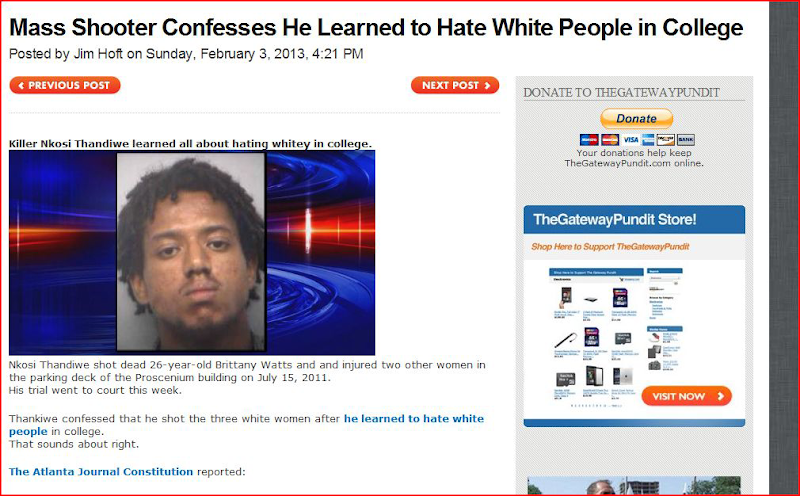 Just when you think The New Republic has gathered some semblance of journalistic integrity ( I was regularly reading   Jonathan Chait, who has moved on to New York Magazine) they post columns like this – Herman Cain Played the Race Card, But Liberals Are the Ones Who Dealt It by John McWhorter

Let us imagine for a moment that a woman came forth claiming that Barack Obama had sexually harassed her fifteen years ago. What would the reaction be from liberal partisans, and assorted other supporters? We can easily imagine that there would be urgent questions about the motivations of the woman who came forward, and the media outlets that broke the news. There would likely be a furious attendance to the possibly “racist” aspects of the coverage. There would be an almost cavalier neglect of the gravity of the charge itself, as if it were somehow utterly beyond consideration that Obama had actually done it. And if the accuser were white, well, that would only further fuel liberal suspicions.

In short, the response to such allegations against Obama would involve playing the race card—and it would bear a strong resemblance to the way Herman Cain has responded to his own sexual harassment scandal. The left has been outraged at the Cain campaign’s response, but it also ought to feel a pang of recognition. If the race card is still a viable part of our national discourse in the Obama era, it is so at the behest of liberals—and it’s no less odious or callow when it is played by the left as when it is by the right.

This reads a lot like some neo-liberal nonsense trying to pass itself off as the ever so rational middle ground when it’s just right-wing talking points with ribbons and bows. Let’s take up McWhorter’s inverted logic on its face. Is Cain than playing the race card or engaging in black on black racism when he makes a disparaging joke about Anita Hill. Cain proved his right-wing bona fides with that little bit of insider wink and nod at getting away with lying about sexual harassment. After all Anita Hill was correct, Clarence Thomas lied under oath. Cain seems to be just plain lying. I think most would and should forgive and forget if Cain had made one offensive joke. That is not the case. He has engaged in a pattern of behavior that does not reflect well on his character. From the very beginning of the allegations  – which quickly came to number four and we’re still counting – Cain’s denials have been inconsistent ( among those who say Cain did engage in harassment are a Republican pollster) . Is that a case of the race card in play or caring about the facts regardless of ethnicity. Cain and the Right are the ones doing the race baiting, black on black racism and not just questioning the veracity of the women involved, they’re doubling down with another wave of harassment – Limbaugh: Gloria Allred Clarified Pronunciation Of Cain Accuser’s Name: It’s “Buy-A-Lick, As In [Slurping Sound] Buy-A-Lick”.  We’ve all been here before. Conservatives and pretend liberals like McWhorter see racial inequality as something to be dismissive of, while liberals see racism as a real phenomenon to be addressed. If liberals point out racism conservatives condemn them for pointing it out. To conservatives calling them out on their racism and throwing yet another race card temper tantrum is code for stop bothering them while they put on another kabuki festival of faux outrage. If Cain were white they’d still be strangling the truth and calling the victims names. Their playbook does not have a section about lines one never crosses because of ethics. In the conservative movement malicious, evil and devious are rationalized in the name of victory and power.

[  ]…“Does anybody think Steve Jobs should not be (sic) in the 1 percent? He made life better for the 99 percent of the rest of us. You want to create opportunities for people with their unique gifts,” he said. “They have created value and wealth.”

Durant is not America’s worse nightmare he is just another clone of the same old nightmare. A champion of delusions and dog-eat-dog plutocracy. Neither Durant or Jobs ( a Democrats by the way) ever made a dollar without labor. Some shmuck somewhere provided the labor, the service, the expertise that made Durant and Job’s wealth possible ( Jobs did not even invent Apple, Steve Wozniak made the circuit board and they put the GUI for their operating system on top of Unix – which many people used to create things and make money). I’m not calling Durant or the millions of people on the Right who think like Durant names when I say they are delusional. They are genuinely detached from reality. Abraham Lincoln said, “Labor is prior to, and independent of, capital. Capital is only the fruit of labor, and could never have existed if labor had not first existed. Labor is the superior of capital, and deserves much the higher consideration.”. A recent article about the Durants who believe in economic pixie dust – The Wrath of Ayn Rand

In her popular novels, Rand glorifies ambitious, fiercely independent individuals who soar and succeed by virtue of their own resources and willpower alone. It’s her ode to individualism that captivates her fans. Also the simplicity of her world view, I suspect: Rand’s is a Manichean universe populated by a few great souls on one side, and the inept masses on the other; the masses would perennially muddle in their own misery if not for the exceptional creativity and bravery of a few to do great things, and it’s up to the masses to keep out of their way. In Atlas Shrugged, Rand declares “The man at the top of the intellectual pyramid contributes the most to all those below him, but gets nothing except his material payment, receiving no intellectual bonus from others to add to the value of his time.” Upon little reflection, Rand’s reasoning is obviously specious. Who on earth rises to the top without the help of someone, anyone at all? Indeed, luck plays an important role in a person’s success, too—if you evaluate it honestly, that is. Rand’s thinking is a pleasant enough fiction for those at the top of the heap, but it’s wholly improbable, naïve—and rude.

Durant sees himself as some fictional superhero even as he lives off the expertise of others. This site’s front page is a daily reminder of the basic researcher that comes via public investment in science and technology. Discoveries made by people who are much smarter and harder working than the right-wing fake superheroes of commerce. The next generation of electronics is going to be based on graphene, whose discovery was financed by the American public.

The Nation’s Ari Berman says Karl Rove’s latest attack ads against Sen. Jon Tester and Elizabeth Warren are further damaging Rove’s credibility and having the opposite of his intended effect. “We saw, for example, after that ad ran, a ton of people flooded the Elizabeth Warren website. Made a lot of donations. And it helped her profile – it didn’t hurt her at all,” says Berman.

The ads, shocker, are fast and loose with the truth as well. Rove is living up to that Faustian deal he made in his youth. Though Unka Karl being an atheist I assume he is not worried about having to pay off the deal with a soul.