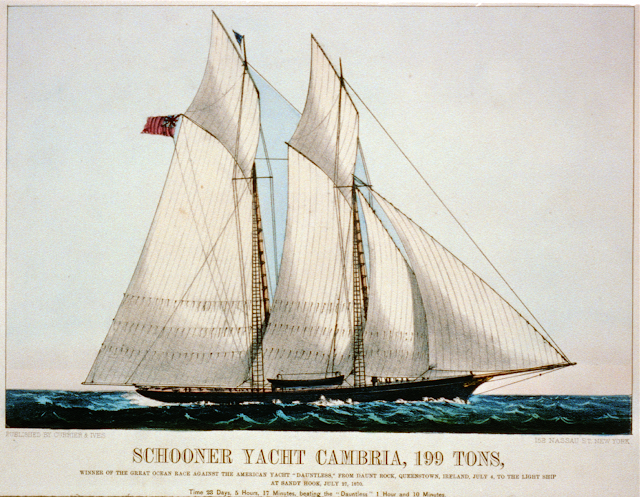 Currier & Ives The Schooner Cambria [between 1856 and 1907]. Hand-colored lithograph. 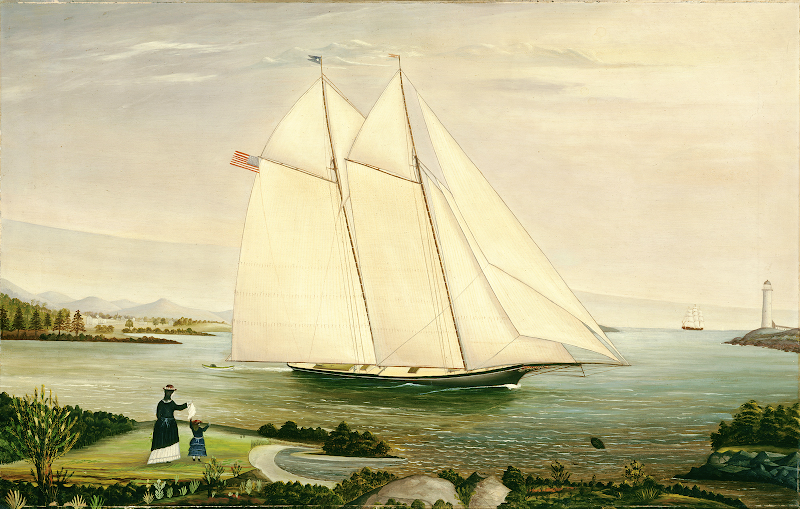 Schooner, American, 19th Century. Oil on canvas. Artist Unknown. This painting is in the permenet collection of The National Gallery in Washington, D.C. if you ever get a chance to visit. Though that does not mean it is always on display. Depending on how late this was done in the 19th century it could be classified as American”folk” art, like that produced by Grandma Moses. I’m not an art history expert, though from my reading what distinguishes the style from mainstream art schools of the time was the flatness and angles. What it lacked in technique it made up for in composition and color. This example seems very effective in conveying the spectacle and importance of seeing such a majestic schooner of that size with the child and woman waving. 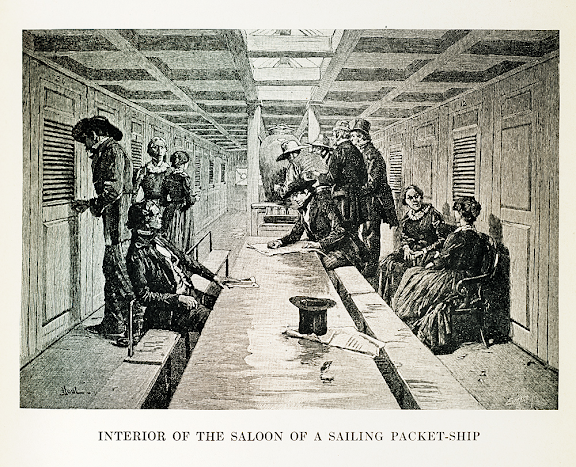 Interior view of a saloon on a sailing packet ship. A packet ship was not a kind of ship like a schooner or frigate, but any ship that carried cargo, passengers and mail. This illustration is from a book published in 1928, but the salon itself is from the very late 1800s. Except for the lack of upholstered furniture, not terrible accommodations.

Dean Baker echoes Paul Krugman’s recent column, The US Should Grow the Deficit, Not Shrink It – The US economy is too fragile to reduce spending and raise taxes. Fiscal austerity is a recipe for worse pain.

There is an astounding level of confusion surrounding the current US deficit. There are three irrefutable facts about the deficits:

First, the United States has large deficits because the collapse of the housing bubble sank the economy.

Second, if we had smaller deficits the main result would slower growth and higher unemployment.

The first point can be easily shown by examining the Congressional Budget Office’s projections from January 2008 (pdf), before it recognized the impact of the collapse of the housing bubble on the economy. The deficit in 2007 was just 1.2 percent of GDP. The deficit was projected to stay near 1.5 percent of GDP until well into the current decade, even if the Bush tax cuts did not expire.

With deficits of this magnitude, the debt-to-GDP ratio was actually shrinking. In fact, the deficit exploded.

It wasn’t because of a surge in reckless spending and/or a splurge of tax cuts, it exploded because tax collections plummeted when the economy went into a downturn. In addition, we increased spending on programs like unemployment insurance. We also had temporary stimulus measures that were explicitly intended to raise the deficit in order to boost the economy.

This reasoning and facts are one of the reasons conservatives drool over the prospect of the death of print journalism – except for Murdoch style tabloid journalism. If you count the morning news programs the big three networks only do about three and a half hours of news programing a day. When is the last time they regularly featured an economists making Keynesian arguments for economic recovery. The stimulus did work. American business has tons of money in the bank, they’re not hiring because demand for goods and services is soft. Get people jobs and that problem stops being self perpetuating.

How is it that Mike Huckabee is a minister and one of the more morally reprehensible people in America with a big soapbox at Fox News, Fox Civil War: Huckabee Attacks Rove For “Absolutely Repulsive” Anti-Tea Party Group

HUCKABEE: I think Karl needs to go through a metamorphosis. You know this idea that somehow a handful of Republicans are going to attack Republicans that the handful doesn’t like? I find that repulsive. I find it absolutely repulsive. This is not how you build a strong Republican Party, is by going after the people in your party who are different than you are. This is fratricide. And if the Republican Party wants to render itself utterly, utterly irrelevant, the best way to do it is to become several little parties within the party, which is apparently what some folks seem to think we ought to do. When you marginalize the Tea Party, marginalize the pro-life and pro-family part of the party, you lose every election coming up in the future.

As far as I can tell Huckabee is under the bizarre delusion that he and like-minded conservative are pro-life because they think the government should determine what happens to a clump of cells, instead of the women in whose body they reside. There are many cultural issues surrounding the well being of the American family, but the single biggest factor in their well being is economic. While Clinton stopped the hemorrhaging in the 1990s, households have been losing ground since the late 70s because of wage inequality and health care costs. The conservative answer has been the parrot call of let the market decide. So the market decied that the Fortune 500 CEOs are somehow worth 380 times that of the average workers. And while health care corporations practice profit making, they are not constrained by markets in the way a potato farmer is. Thus annual health care cost inflation has averaged 14% a year while national inflation has averaged under 2%. Huckabee will start looking a lot less like an Elmer Gentry huckster the day he stands up for women’s s autonomy over their own bodies and starts actually doing something for American families. A for his differences with Rove. Since conservatives are so big on social-Darwinism how about they have a free- for- all fighting match. The survivor gets to determine the direction of conservatism’s next wave of hypocrisy and massive failures to accomplish anything for the country they say they care about.

[ ]…During the hearing, when Sen. Kelly Ayotte (R-NH) asked Panetta about conversations he had had with the president during the attack, Panetta testified, “We had just picked up the information that something was happening, that there was an apparent attack going on in Benghazi. And I informed the president of that fact, and he at that point directed both myself and General Dempsey to do everything we needed to do to try to protect lives there.” Panetta later reiterated, “[Obama] basically said, ‘Do whatever you need to do to be able to protect our people there.’ ”

As the Associated Press reported, “Panetta said he and Dempsey were meeting with Obama when they first learned of the Libya assault. He said the president told them to deploy forces as quickly as possible.”

Indeed, Panetta did deploy forces. The AP stated: “Between midnight and 2 a.m. on the night of the attack, Panetta issued orders, telling two Marine anti-terrorism teams based in Rota, Spain, to prepare to deploy to Libya, and he ordered a team of special operations forces in Central Europe and another team of special operations forces in the U.S. to prepare to deploy to a staging base in Europe.”

While a six-member quick reaction team already in Benghazi and reinforcements from the U.S embassy in Tripoli did help defend the Benghazi consulate, the AP article went on to note that unfortunately “[d]efense officials have repeatedly said that even if the military had been able to get units there a bit faster, there was no way they could have gotten there in time to make any difference in the deaths of the four Americans.”

The independent Accountability Review Board, which was set up by the State Department to investigate the Benghazi attack, determined there was “no evidence of any undue delays in decision making or denial of support from Washington or from the military combatant commanders,” and continued, “Quite the contrary: the safe evacuation of all U.S. government personnel from Benghazi twelve hours after the initial attack … was the result of exceptional U.S. government coordination and military response and helped save the lives of two severely wounded Americans.”

Here’s a great slogan for Republicans going into the 2014 mid-terms: “We exploit tragedy and death better than the other guys. We’ll beat it like a dead horse for so long it will begin to sound like worn squealing brakes in the background.” Conservatives deserve some special credit for the incredible energy they put into delusional thinking and the perpetual con-game, they call political principles. Another good example, the conservative fixation with rewarding utter incompetence. How can they carry on the crying game over Benghazi and then, Rep. Michele Bachmann (R-MN) Keeps Seat On Intelligence Committee Despite Discredited Anti-Muslim Witch Hunt

Boehner (Speaker of the House John Boehner (R-OH) in his statement making the announcement praised the lawmakers “charged sacred task of supporting that mission by ensuring the intelligence community has the resources and tools it needs to stay ahead of the evolving threats we face, and by conducting effective oversight of the administration.”

The last “threat” Bachmann was ahead of was keeping her husband from being indicted for Medicare fraud.